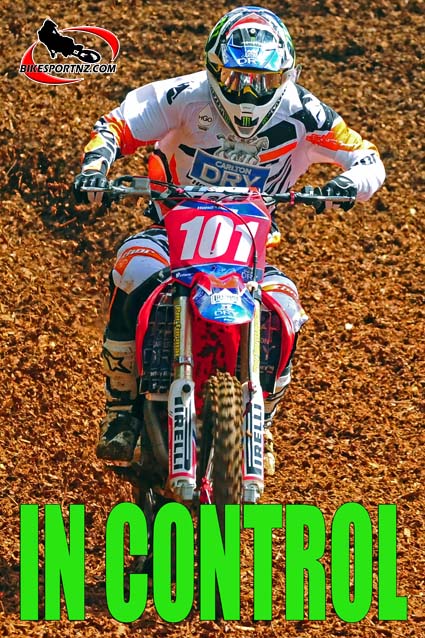 Tauranga’s Ben Townley has one hand firmly on the national MX1 crown after another dominating display at the third round of four in this season’s New Zealand Motocross Championships on Sunday.

The Carlton Dry Honda rider just needs to keep it upright and the national MX1 crown is his.

Townley again won the day on Sunday – although he was forced to accept runner-up spot for the first time this season when he crashed in turn one and had to battle though almost the entire field in one race – and stretched his lead out to 21 points over his chief rival, fellow Kiwi international Josh Coppins (MXDK Yamaha), of Motueka.

With three-quarters of the championship in the bag, only a massive disaster would prevent Townley from taking the MX1 crown this season and, with the final round on his home-town track of Taupo in two weeks’ time (March 18), it seems the Honda ace is well on target to win his first national title since embarking on an international career that has kept him away from the domestic scene since 2001.

“It was tough today,” said Townley. “I had a big weekend (winning round two of that national series at Patetonga, near Morrinsville) last weekend, followed by bike testing for my team in Australia during the week. I came here today feeling a bit tired and flat,” said Townley, who still managed an impressive 1-2-1 score-card on Sunday.

“I did enjoy the challenge of coming from behind to get up to second spot in race two today. I have led most races this series, so having to battle through the field was a good training exercise for me.”

Broxholme surprised King and Columb by snatching victory in the day’s second MX2 race. The Bel Ray Botany Honda rider finished the day 4-1-8 in his three outings, enough to establish himself as a contender for a podium finish this season. Broxholme finished fifth in this class last season.

“In the second race I was sitting behind Darryll King and things were getting a bit insane with three of us trying to go through corners together. I was lucky that I managed to pass and keep it all on two wheels.

“I’ll be training hard before the final round.”