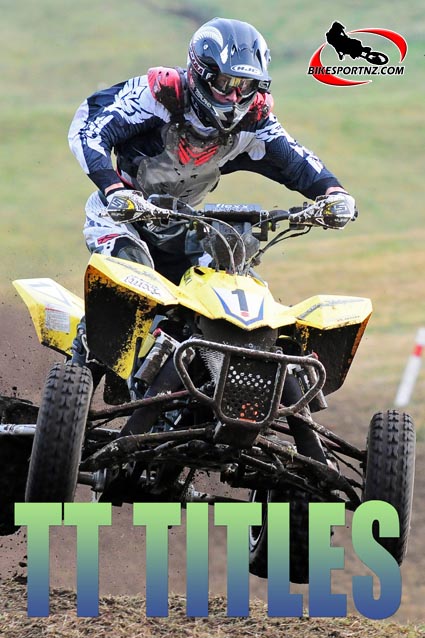 Taumarunui’s Quentin Palmer is on a mission to make it four national TT titles in a row this weekend.

The ATV quad bike star made it three consecutive national titles at the New Zealand TT Championships at Kuratau last year and, although officially now retired from fulltime racing, he’s dusting off the helmet and boots in an attempt to stretch his winning run to four titles at the Bike Torque Yamaha-sponsored nationals this weekend.

The nation’s elite quad racers share the race programme with their two-wheeled cousins at the meeting near Turangi, at the southern tip of Lake Taupo, on Saturday and Sunday, with several hundred riders expected to show.

I wasn’t an easy weekend’s racing for Suzuki hero Palmer at this event last season, but the quad bike hero did enough to get the job done and he possibly still rates as quad class favourite ahead of this weekend’s action.

He can count on coming under heavy fire from long-time rival Ian Ffitch (Honda), of Amberley, and will also be challenged by Rotorua’s Jason Jepson (Yamaha), among others.

Meanwhile, the bikes section was dominated last season by Taupo rider Brad Groombridge, who won both the open class and the 250cc class as well.

The then 19-year-old Groombridge (Suzuki) was challenged early on in the open class races by 45-year-old veteran Mitch Rowe (Yamaha), of New Plymouth, but he eventually romped away with an unbeaten string of five wins.

But a new champion will definitely be crowned this weekend because Groombridge is sidelined with injury and a non-starter at the event this time around.

At least one of the superstars from last year won’t be at Kuratau this time around, with Otago’s Courtney Duncan currently away racing in the United States.