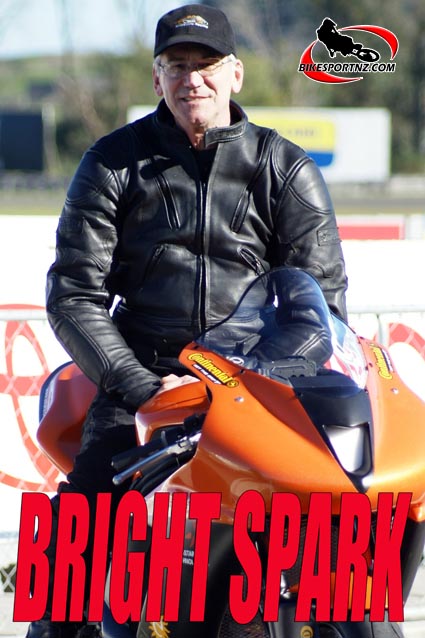 Testing at Manfeild yesterday of a battery-powered racing motorcycle with electrifying performance is providing a pointer to the future and also serving as a tribute to a rider who was well known at the circuit.

The circuit has been playing host to a research and development process in which the motorbike, appropriately enough presented in a colour called ‘electric orange’, is put through its paces.

Developed by clean energy company Astara Technologies Limited, the machine is a showcase of the potential of latest generation battery and drive systems and a test bed for the company’s locally designed products, the first of which is a battery management system.

It is also intended to fly the flag in motorsport, Astara director Iain Jerrett says.

The aim is to compete in TTX GP, an emerging international racing series for electric-powered racers. While New Zealand is not directly part of that scene – the closest championship being in Australia – Manfeild is the perfect test ground.

“The race track is a great channel for testing and ongoing development, for making fast improvements,” says the Kapiti Coast man.

Mrs Verry agrees, reminding that Toyota New Zealand also based its road car development at the track for a number of years and still frequently utilises the facility for ongoing vehicle programmes. 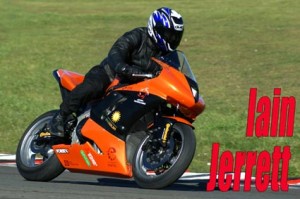 “Astara, of course, is very much a tomorrow-today process. This is the development of pure electric technology that looks to an unavoidable reality, the day when we will have to be much less reliant on fossil fuels.”

Astara has identified Manfeild as the perfect location for durability and performance testing. The circuit is near Astara’s base, the Clean Technology Centre of NZ in Otaki on the Kapiti Coast, and also has a proud involvement with two-wheeled motorsport. It regularly hosts national motorcycling competition and held the world’s attention when staging rounds of the World Superbikes Series.

Mr Jerrett is keen to pitch his machine into TTX GP. “Kiwis love motorsport and I think once they see an electric bike racing they will embrace it as yet another facet of the sport.”

He credits the late Paul Dobbs, a Manfeild regular well known in both modern and classic racing circles, for providing the impetus to develop the racing machine.

The Onewhero racer was intrigued by electric racing possibilities after riding an Austrian built machine in the inaugural electric race at the Isle of Man, and soon after Paul and his wife Bridget made contact and proposed a Kiwi team.

“Dobsy came and rode the road bike, thought we’d be competitive and the race bike project was hatched from there.

“We started work on the project then were shocked to hear of Paul’s death racing at the Isle of Man last year,” Mr Jerrett said.

“The project actually got shelved for a while and then one day my wife simply stated, ‘you’ve got to finish it’ so we re-thought the machine and built one with less range ideally suited to closed circuits such as Manfield.”

In terms of performance, however, battery bikes are worlds apart. The racebike utilises smaller, lighter and more powerful batteries, is lighter and runs much faster, trading off range for raw power.

“The road bike has batteries that have a good price-to-performance ratio and are excellent for a road machine. They don’t have to give the energy and power potential asked of the batteries in the race bike. That has high-end cylindrical cells with much higher continuous output.

“Both bikes are managed by our vehicle management system incorporating our locally designed and built components.”

The management system is the key to it all. This hardware is the first in a series of electric vehicle control and management products and ensures the high performance batteries are working safely and to ultimate potential, and cannot be over- charged or over-discharged an important consideration to maximise performance and efficiency of the vehicle.

In general aspects of operation, the electric machines are in a world of their own. Because the normal engine, exhaust and gearbox has been removed, there are no traditional motorbike sounds. The sole mechanical noise is a shrill whirring that increases with the pace; this is a direct-drive bike, now, and that’s the sound of the drive chain whirring around an oversized sprocket on the rear wheel.

That’s not all. In place of the usual petrol gauge and rev-counter on the dashboard is an LCD screen monitoring the batteries under the seat and within the frame. Ultimately the bike will take a ‘smart’ dashboard that can be tailored to utilise all sorts of information well beyond how much battery life is remaining to manage the vehicle.

But years of riding experience has reinforced that the data has to be relayed in easily understood format, Mr Jerrett says. “The time a rider is looking at the information display is time taken away from looking at the road. Most of the smarts the rider will never see.”

The road-going electric bike refuels from a regular household socket, a full charge taking eight hours with a small portable charger and providing 100-150 kilometres’ travel. The track-bound racer won’t go that far, but isn’t expected to, because performance comes first and most electric races cover 20 – 30kms.

Accordingly, the machine is designed to belt out maximum grunt for the duration of a sprint race and has the capability to be fast-charged back to peak in the space of half an hour.

The race bike is an important test bed for the technologies he is immersed in. “You can test things on the bench but there is no substitute for stress testing in the real world.

The bikes attract a lot of attention. Onlookers always wonder at the silence of the Astara Triumphs when they are switched on, Mr Jerrett says.

“Then when it takes off it just keeps winding up. People always say ‘we’re waiting for the gear change’, but there’s just no gear change.”

The bike provides a vivid reminder that “electric vehicles don’t have to be boring – or slow,” said Mr Jerrett, who agrees that a motorcycle is a natural personal fit anyway. He’s a keen recreational rider.

Mr Jerrett acknowledges that electric motorcycles are not so rare these days, however bikes of this size and power are. And they are New Zealand firsts.

Some different types of battery management systems exist elsewhere too.

“However, our product is a robust Kiwi designed offering, the market is in its infancy, and the management system we have developed is not limited only to vehicles. It can be used with battery packs in virtually any application that requires battery monitoring and control.”

The need for this type of product is mushrooming as applications utilising electric drive systems using latest battery technology increase.

“The drive system used can be used to supply electric power to a range of vehicles. It doesn’t have to be pushing a bike. It could be pushing a car, a helicopter, a boat, a street sweeper.

“The batteries can be charged from solar, from wind, or any renewable energy source – that’s an awesome concept.”

The bikes have not been cheap to build being “one-offs” however the investment in time and money has been worth it.

“There is no substitute for “hands on” to understand how new technologies work and identify the benefits and issues they may have” Mr Jerrett says.

“With the attention the bikes have attracted from sponsors, potential customers and, most importantly, in attracting assistance from Grow Wellington, Naturecoast and TechNZ, they are well on the way to justifying the investment.”

© Words and photos by Richard Bosselman