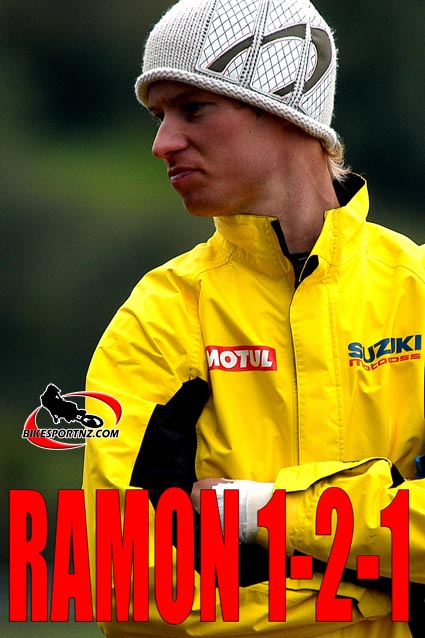 Belgian former world champion Steve Ramon won two from three motos on his works RM-Z450 to claim the fourth round of the Belgian Motocross Championship at Tongeren at the weekend.

Ramon had sufficiently recovered from his stretched right groin to compete at the tricky circuit south of Hasselt and went 1-2-1 in the three races.

There was less good news for his team-mate, current MX1 World Championship leader Clement Desalle, who collided with another rider over a jump and in the ensuing crash he briefly dislocated his right shoulder.

Desalle will go for a scan today but is hopeful of a positive prognosis after the relatively short time the limb was displaced compared to a similar injury picked up on the same shoulder at Valkenswaard in Holland in 2010. The Belgian was able to win the following race two weeks later in Portugal on that occasion. The dislocation – and other small scrapes – occurred after the 23-year-old tangled with Jeremy Van Horebeek in the first moto.

Despite a coating of rain on Saturday, Tongeren was in good shape for racing and Ramon defeated GP peers Ken De Dycker, Davide Guarneri and Shaun Simpson to the top step of the podium.

“The groin is getting better and today it was OK; no pain or complaints and I made no mistakes with my riding,” he said. “The rain was pretty good for the dirt and the track was technical with short-bumps and an ‘old school’ layout. I was feeling good and confident and it showed in the motos.”

The riders now head to Sweden this week for the first of three GPs in a row; Germany and Latvia forming the rest of the busy trip.