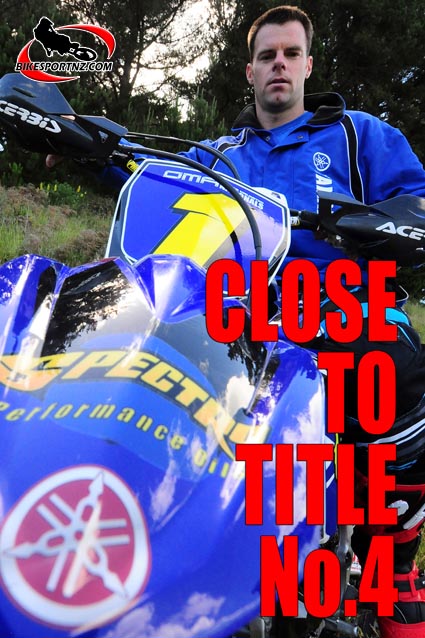 The Pahiatua man took his Yamaha YZ450F to another commanding win, this time at round five of the 2011 OMA series in Michigan at the weekend.

The victory gives Whibley a massive 36-point series lead after five of 10 rounds.

“I grabbed a massive holeshot and took control of the race right from the start,” said the 30-year-old former forestry worker, known affectionately on the cross-country scene as The Axeman.

“I led the way through the fifth-gear wide-open grass rollers that led us into the sandy woods. That one section was the only time in the lap where the riders got to stretch their legs, as the majority of the lap was made up of second-gear, tight, enduro-style woods.

“Threading through as smooth as possible was the key to quick times and I concentrated on making as few mistakes as possible.

“I was able to keep an eye on second place near the end of the lap as I completed a switchback section, confirming my pit board signal that Chris Bach was only 10 seconds behind and pushing hard.”

However, that’s when Whibley made a small mistake, racing too close to a tree and being “stabbed” in the cheek by a branch.

“I could feel the warm sensation of blood flowing down my face but quickly put that out of my mind and got back to the job at hand. Near the end of the lap I could again see I had picked up a couple seconds over Chris.

“I pitted at the completion of the third lap and my pit crew (Feilding man Scotty Brooker and Whibley’s wife Katherine) had me in and out very quickly.

“With three laps remaining, I kept up the pace and continued to creep away from Chris. By the time the flag came out I had pushed my lead out to over a minute. My Yamaha team-mate Jordan Ashburn recovered well from a bad start and had moved up to third, although he was receiving some pressure from Scotty Watkins (Honda) on the last lap and did well to hold him off.”

Whibley now looks ahead to the next round of the Grand National Cross-country Championships, set for West Virginia on June 26.

POINTS AFTER FIVE OF 10 ROUNDS: