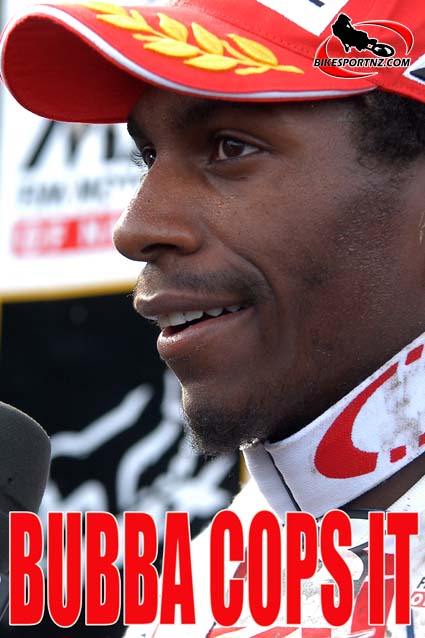 Florida’s James “Bubba” Stewart, the black American motocross champion dubbed the “Tiger Woods of supercross” was arrested Monday on suspicion of impersonating an officer and pulling over a vehicle in Osceola County in which two off-duty troopers were riding.

The 25-year-old Stewart was arrested on a charge of impersonating an officer.

According to the Florida Highway Patrol, Stewart was driving his 2008 Toyota Tundra pickup truck about 5 p.m. on State Road 417 in Osceola County when he attempted to stop a vehicle.

Stewart, who grew up in Haines City, had red and blue police lights in the dashboard area of his pickup, troopers said.

The off-duty troopers suspected that the pickup was not an undercover police vehicle, the FHP said. Stewart pulled alongside the trooper’s vehicle, and the driver identified himself as a law enforcement officer, the FHP said.

Stewart, who had one passenger in the pickup, then sped off, the FHP said.

Stewart and his passenger, Thames Jehrrod Quinault, 44, of California, were arrested. Quinault faces charges of tampering with evidence after he hid the blue and red lights in his luggage, troopers said.

According to Stewart’s website, he won a record-breaking 11 American Motorcyclist Association Amateur National titles, and he was named 2002 Rookie of the Year in his debut pro season.

In 2004, Stewart won the AMA 125 East Supercross Championship and the AMA 125 Motocross National Championship, and four years later, he became the second rider to complete a perfect motocross season — 24 wins in 24 races. Stewart capped off his perfect season with the 2008 AMA Speed Athlete of the Year award.

In 2003, Teen People named Stewart of 20 teens who will “change the world.” He’s also been featured in other publications, including Rolling Stone, Maxim, and GQ.

Stewart later bonded out of jail.