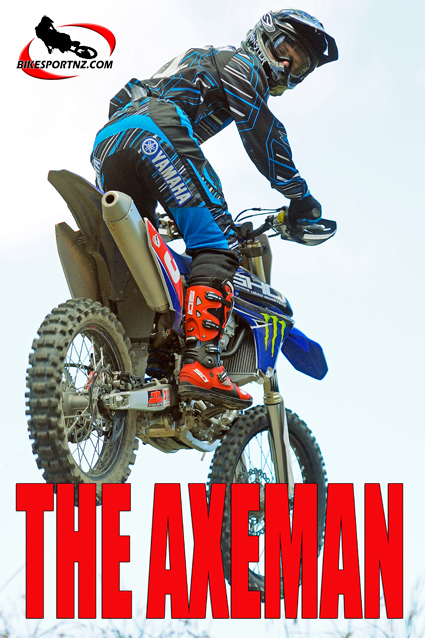 New Zealand’s Paul Whibley is going from strength to strength in the United States.

After winning round two of the Grand National Cross Country Championships (GNCC) a week ago, thrusting himself right back into contention for the title after an opening round bid ruined by bad luck, the man from Pahiatua has just won round two of the Mid East Hare Scramble Series in North Carolina.

While winning this lesser championship is not the main aim for the Yamaha ace — the GNCC title is the one he covets most – it is still important for Whibley (Yamaha YZ450F) to stretch his legs between GNCC events and a win against top opposition is always satisfying.

The former Manawatu forestry worked, affectionately dubbed “The Axeman” by his rivals in the US, was in commanding form at the weekend.

“This race was held near Morganton, North Carolina, and just a short two-hour trip down the road from our AmPro Yamaha Team base,” said Whibley.

“With the first pick of the start line, I took the inside line for the very short start straight. I got a good jump and was side by side with Stu Baylor going around turn one.

“I had a better line going into turn two and took the lead. Midway through the first lap the track split up one hill. I chose the left line, Stu and Jesse Robinson took the faster right line and inherited the lead.”

It continued to be a game of dirt-biking chess with the riders trying to outwit and out-guess their rivals as the terrain offered many alternatives, with Whibley able to out-smart both Baylor and Robinson by choosing a superior line on a tricky off-camber hill.

“Coming around to complete the first lap, I led the way,” Whibley smiled.

“On the second lap, I had a small moment on an exposed root and lost drive up a hill climb, allowing Jesse to slip by and into the lead again. As we closed in on the motocross track section at the end of the lap, I closed in on Jesse and was able to sneak up the inside of him as we approached the double jump.

“During the week we had been able to test some new Kenda tires and I ran the new Millville combo at this race and I have to say they performed great, finding traction on the range of conditions from hard pack to loam at this race track.

“So, from lap three onwards I was able to open a gap and build a lead. By the time the flag came out at the two-hour mark, I was over a minute in front.”