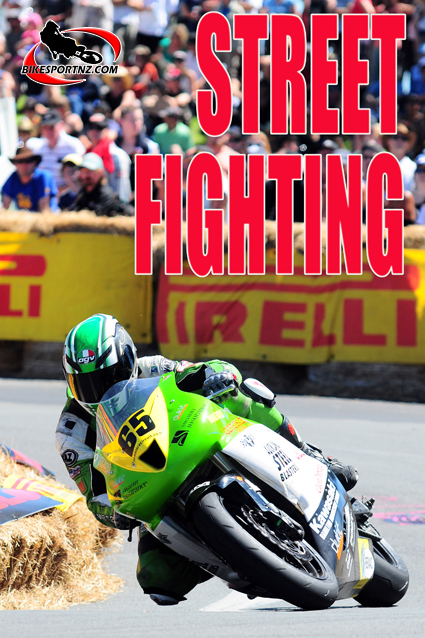 With a new naming rights sponsor for 2011, the Mobil 1 Battle of the Streets is set to burst into action along the streets of the ‘antique town’ of Paeroa, and this year is looking to be bigger than ever.

Mobil 1 have long been supporters of all forms of motorsport although it took the forward thinking of Mobil 1 business development manager, Brett Glazer to get them to snap up the rare opportunity of acquiring the naming rights sponsorship of one of the biggest motorcycle meetings in the country.

With the global financial crisis causing everyone to tighten their budgets, it was with deep regret that Yamaha Motors New Zealand was to relinquish their long-term sponsorship of the Paeroa street race. But with the outlook still gloomy, Peter Payne from Yamaha was kind enough to give the race organisers plenty of notice so that a replacement could be found.

Glazer heard about the loss of Yamaha through motorcycling circles, and was instantly on the phone to the heads of Mobil trying to convince them to pick up the sponsorship of this legendary event.

And it was good timing, as it looks like this year’s meeting, the 20th anniversary, is going to be the biggest yet.

Paeroa obviously has some magical attraction, with many of the big names showing their support for the street race and entering. With more than 170 entries received at this time including big names like Tony Rees, Ray Clee, Shaun Harris, Hayden Fitzgerald and Sloan Frost, there’s sure to be all the usual big action in when the bikes take to the streets of Paeroa.

There will be a notable first-timer on the streets of Paeroa this time around too … Australian superstar Dan Stauffer.

The Bernard Racing Yamaha rider is a very fast learner and immediately rates as one of the favourites to win on Sunday.

Stauffer turned up for the first time at the other Battle of the Streets meeting, the annual Cemetery Circuit event in Wanganui on Boxing Day, and made history by winning there as a rookie.

Mobil 1 have been working hard with the committee to make the 20th anniversary round even more exciting for the spectators, with plenty of other attractions to keep them on their toes, as if the close racing wasn’t enough.

Andrew Stroud will be attending the event and brings with him one of the last remaining Britten motorcycles, which he will not only have on display in the pits but will also be doing demonstration laps around the track. This will be a fantastic opportunity to not only see this remarkable machine close up, but also see it thundering through the streets of Paeroa with the spectator positions much closer to the action.

Graeme Crosby will also be attending the meeting to promote his new autobiography as well as do some demonstration laps around the circuit with Eric Bone. With everybody raving about how fantastic Croz’s book is, it will be a fantastic chance to meet the man himself and maybe even get a copy signed.

Draggin Jeans Demonstration – When the now famous motorcycle jeans were first released, the owner of the company decided to demonstrate how well the Kevlar lining worked by having himself towed down the start/finish straight of Phillip Island on his backside. This hasn’t been seen since this first demonstration, until now that is.

At Paeroa this year, a willing retailer of motorcyclist’s favourite denim jeans is going to be towed down the High Street behind none other than Sloan Frost aboard his BMW S1000RR race machine. This certainly is something not to be missed.

Quite often there are delays at Paeroa due to crashes or the track needing to be attended to from oil spilages. Well, this year there will be something to keep the crowds entertained with one of New Zealand’s top stunt riders coming to perform.

Complete with female companion who hangs off the bike at precarious angles while Nick Kroeze from Stunt NZ performs mind-boggling stunts, there’s sure to be plenty of tyre smoke and popping tyres before the day is over.

Finally, Mobil 1 will be having a stand at Paeroa selling the anniversary t-shirts. There’ll also have a selection of beautiful Mobil 1 girls that will be happy to stop for a photograph. Located on the entrance to the pits where Yamaha were normally positioned, this year more than ever will well be worth paying a visit.

With more stands and retail stalls also booked to come along, all roads are going to be leading to Paeroa on Feb 20 for any motorcyclists or those who just love close racing.

Pay at the gate. Eftpos available on some entrances. 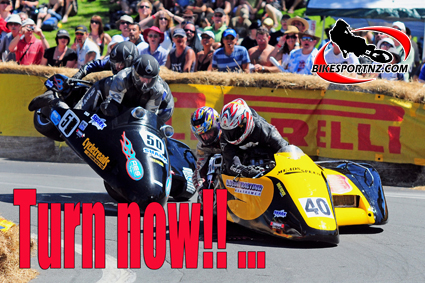