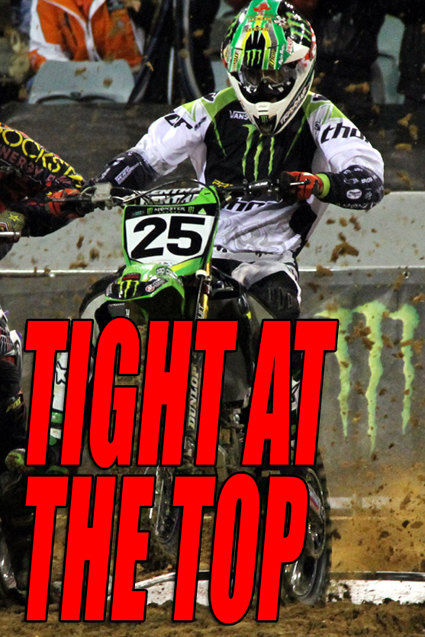 American supercross riders Justin Brayton, Josh Hansen and Kevin Windham once again claimed all podium positions in round three of the Monster Energy Super X in Launceston on Saturday in the always exciting ‘Survival’ final format.

The Survival format was raced over four, seven lap sprints with the bottom five riders eliminated after each race. It created incredibly exciting racing because series front runners knew the smallest incident could have caused them to be eliminated early and therefore miss out on valuable championship points.

Eventual race winner Muscle Milk/Toyota JGRMX‘s Brayton made it clear he wanted to leave Australia with a win and raced with determination all day entering the finals with the fastest qualifying time. He won three of the four finals with Monster Energy/Pro Circuit Kawasaki’s Hansen the only rider to take a win off him in the third race. Hansen once again claimed second place overall and Geico Powersports Cougar Honda’s  Windham came third.

CDR Rockstar Yamaha’s Jay Marmont and Rockstar Motul Suzuki’s Jake Moss joined the US contingent in the final sprint. Moss hit his best form of the series and had the fastest lap time of the night, but had an unfortunate fall on the first corner, which put him out of contention and fifth overall. The always consistent Marmont finished fourth.

Hansen still leads the overall points standing with the departing Brayton in second and Marmont third.

“I am excited to go out on top, but it’s a little bittersweet because I would like to stay and race the whole series,” said Brayton.

“I have had such a good time here in Australia and I really hope I can come back and compete here again next year.

“I really want to thank the team at Super X for bringing me out here and for putting on such good events as well as Craig Dack and his team for making me feel right at home.”

It was a battle between the JDR Motorex KTM and Rockstar Motul Suzuki team riders in the Lites Double Header final, which was raced over 2, 12 lap races with Lawson Bopping taking the overall win, PJ Larsen second and Matt Moss, who had a big crash in qualifying and injured his knee, in third.

JDR Motorex KTM’s Ryan Marmont took the first holeshot with team-mate Larsen hot on his heels and taking over on lap four to lead for the whole race. Marmont went down on a berm leaving Rockstar Motul Suzuki team-mates, Bopping and Moss, in a close challenge for second and third, but Bopping held on for second.

Marmont grabbed the second holeshot too and sped out to a good lead, but Bopping was closing on him and the pressure eventually caused Marmont to crash on the last turn allowing Bopping to pass for the win.

Moss still maintains the championship lead ahead of Larsen in second and Marmont third.

Matt Moss got the Aussies off to a great lead in the first race over Larsen then tapped in Simmonds who maintained the lead by holding off Alessi. Brayton and Marmont were up next with Brayton unable to gain enough ground. Hansen and Jake Moss followed with Moss maintaining the lead. Reardon and Windham finished off the race changing the lead numerous times, but after a small slip up from Reardon on the rhythm section, Windham passed him and took the win for the US.

Dylan Long was the dominant winner once again in the Michelin Development Series. Jacob Wright was second and Jake Emanuelli third.

The series now has a week off before round four in Auckland, New Zealand on Saturday November 13.

For more information on or to purchase tickets please visit www.superx.com.au