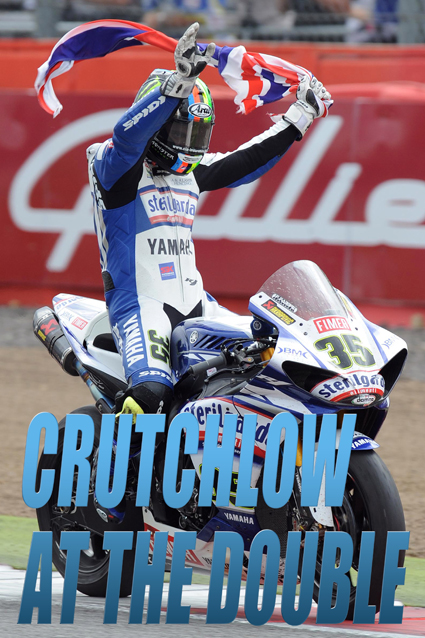 Britain’s Cal Crutchlow made it two in a row at Silverstone, delivering the double win at his home race at round 10 of the Superbike World Championships at the weekend.

The Yamaha Sterilgarda World Superbike YZF-R1 rider ended a flawless weekend’s riding with a masterful display of race craft, enough to move him up from 10th to fifth in the championship standings, although still a long way behind leader Max Biaggi (Aprilia), the Italian 60 points clear of the next best man, British Suzuki rider Leon Haslam.

Third in the rankings after the weekend is Britain’s Jonathan Rea (Honda), while Spain’s Carlos Checa (Ducati) is fourth.

But there was no denying that Sunday belonged to Crutchlow.

A good start from pole position in race one saw Crutchlow quickly into second, behind Rea.

Crutchlow then played the waiting game, comfortably following the Honda rider just 0.1 seconds behind until mid race before taking the lead. He surrendered briefly to Rea but then re-took quickly and pulled away to build a 1.6 second lead as he crossed the line to claim his maiden win of the championship.

Race two saw a repeat of the first with Crutchlow quickly settling in behind Rea, again maintaining a gap of just 0.1 to 0.2 seconds until just three laps from the end when he again pulled out to take the lead.

Crutchlow clocked the fastest lap of the race on the penultimate lap, building a two-second advantage as he crossed the line to deliver the long-awaited double victory for Yamaha.

Team-mate James Toseland made the most of his less than perfect grid position start in both of the two superbike races. The first saw him move as high as sixth whilst chasing down the Aprilias of Biaggi and Leon Camier before finally settling for eighth at the line.

The second race saw an even more determined Toseland pushing on hard. The British rider spent much of the race battling with Haslam for fourth place having carved through the ranks and taken championship leader Biaggi mid race for fifth. The battle between the two Brits went to the chequered flag with Toseland less than four tenths behind Haslam across the line.

Crutchlow’s incredible performance means he leaves Silverstone having jumped up from 10th to fifth in the rankings, now sitting on 188 points, 16 points behind Checa. Toseland remains in sixth place, now on 179 points as they head to the Nurburgring at the beginning of September after the summer break.

“We’ve been trying so hard all year to achieve a win, I’m ecstatic that it has happened at my home race,” said Crutchlow.

“It’s been a tough weekend with all the Brits trying hard but we knew we had the pace. We were worried about tyre wear but it wasn´t too bad. It was a little bit cooler in the first race which helped our bike as well. We now need to carry on and fight for the rest of the season. It´s been a dream come true today, three Brits on the podium for both races is brilliant.

“The British fans have been fantastic; they came out today and gave us tremendous support all round the circuit, a brilliant day for me, a brilliant day for Yamaha, Sterilgarda and all our other sponsors. All credit to Johnny Rea he rode really well in both races but I was able to pick him off with a couple of laps to go.”