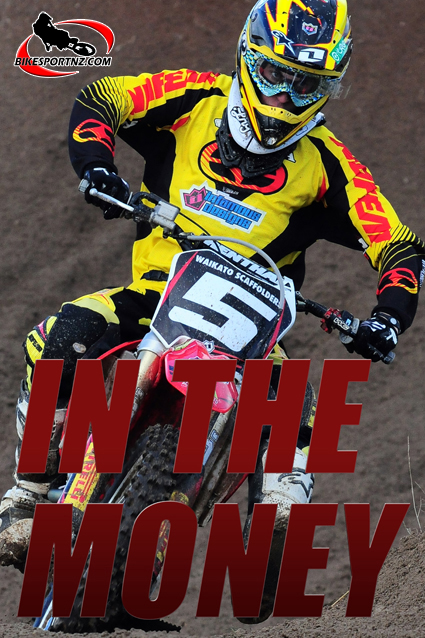 It was a dash for cash on Saturday and there could be only one winner.

The Whangarei Motorcycle Club ran the third annual Dash-4-Cash at Pohe Island, Whangarei Harbour Basin, in conjunction with the Northland round of the Rally of New Zealand.

Total prizemoney of $5000, with $3000 outright going to the winner of best of three final run-offs between the fastest two outright. This was arrived at by a process of quick-fire heats, quarter-finals, semis and mains.

The ‘winterless’ north turned on a magic fine day for the more than 200 competitors, but the race track was very wet and developed deep ruts that challenged all. The $3000 purse drew top-level racers Michael Cotter, Peter Broxholme, Shaun Fogarty, Ollie Sharp, Jesse Wiki, the Neild brothers of cross country fame, Mitchell and Damon, plus last year’s winner back to defend his title, Taupo’s Nick Saunders.

A big crowd of more than 2000 were in attendance to watch the car rally special stage and they were won over by the bike racing and didn’t leave.

This added to the atmosphere of the event and local competitors such Bruce Bain on his nitros-powered CR500 Honda and local Whangarei Yamaha dealer Jamie White, on a hand-crafted TL1000 Suzuki-powered ATV put on a good show.

The dash-4-cash is run as the middle event between two car rally special stages and, as such, runs on just under a three-hour time constraint period.

The Whangarei club has fine tuned the logistics and the action happens fast n’ furious with riders going from the pre-grid to traffic light christmas tree mx-style gate start in record time. This efficiency, plus rapid-fire racing between all competitors in the elimination process is what holds the crowd enthralled.

Wiki the dominate racer on the day with Cotter keeping him honest in the open class plus winning the first final to set-up a very exciting run-off for the final two.

It was a win apiece with $3000 to the winner of the final moto, with Wiki and Cotter under brakes into the top turn dead equal and the crowd going nuts.

Wiki gave Cotter a little ‘love-tap’ with his outside elbow, grabbed a two-bike length lead while Cotter re-gathered his form and Wiki rode to the chequered flag and a $4000 payday. The $3000 for winning the final, the rest his two class and race wins.

As a final aside, the Whangarei club wanted it noted they didn’t deliberately hold the event to clash with the Mini TT champs. The land availability and date declared is controlled by the car rally race and this dictates when they can run.