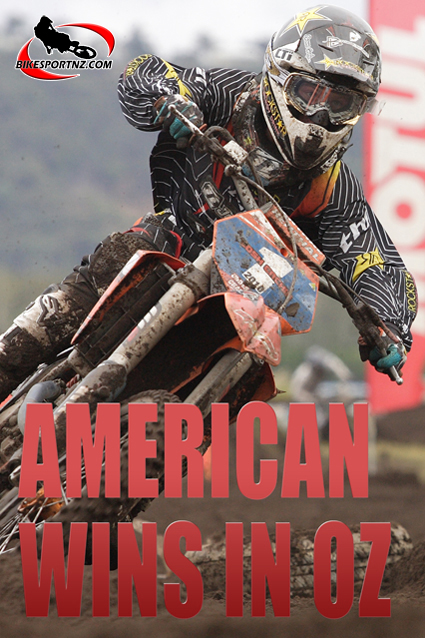 The JDR Motorex KTM rider dominated the series and took the title win with one day to spare at the massive double-header round.

Larsen, from California, put the Australian riders on notice at the opening round at Horsham, his raw speed in the rough conditions setting the standard for the remainder of the Championship.

Only needing a handful of points to take the championship win, Larsen rode consistently, securing victory with three races to spare.

One of the few riders to challenge Larsen was Mt Gambier local and Serco Yamaha rider Kirk Gibbs who placed second in the championship.

Gibbs continued to improve all season and was consistently one of the fastest in the field – with one race to go he had secured second place in the championship.

Gibbs’ team-mate and local rider Ford Dale battled with the injured JDR Motorex KTM rider for the remaining podium place, however after injuring himself during Saturday’s racing, Marmont just didn’t have the speed.

Dale passed him in the second to last race and rode strongly to secure his place in the top three in the Pro Lites championship.

New Zealand’s Michael Phillips (Honda) also impressed during the series but, ultimately, he had to be satisfied with finishing seventh overall.

The New Zealand MX2 champion, who was sixth overall with three top-10 race results early on, ended the day 14th after crashing out of the final race.

“I felt good and fast but I just couldn’t turn it into a result today,” Phillips lamented.

“I crashed hard in the final race and was unable to continue as I tore open the stitches in my elbow.

“Unfortunately, I have had an up and down season, but I can’t thank the team enough for their support and I was glad to be a part of it,” he concluded.

Speaking after his win on Saturday, Larsen was pumped with the win but sad not to be able to come back in 2011 to defend his title.

“I’m glad we could accomplish this and I couldn’t have done it without the entire team – everyone has been working so hard so it’s great to get the team their first championship.

“I’m glad I got to run the number one plate in the final day of racing, as it will be my only opportunity to run it and it felt pretty good.

“I think I might be glad I’m leaving and not have to deal with them again because those guys are picking up and they’re going to be strong.

“I wish I could stick around a little bit more and who knows; you might see me back here in a few years which would be good.”

In his first overall podium finish Gibbs was stoked with his second place.

“I’m happy as, it’s final starting to sink in – coming second in the Championship,” Gibbs said.

“Hats of to PJ and the JDR Team – he rode awesome, well done to Ford, getting third overall and Lawson [Bopping] rode well too.

“I’m just stoked to come away with a few race wins this weekend and really happy for the team.”

Local rider Dale was happy to get on the podium and was pleased with his consistency.

“This is awesome – finally consistency pays off, – people have been trying to tell me that all year and obviously it works!” Dale said.

“It’s awesome to get the team up here again, and to win a few races.

“Having my family and friends out here is fantastic and the crowd is great and I really have to thank everyone for helping me out this season.”