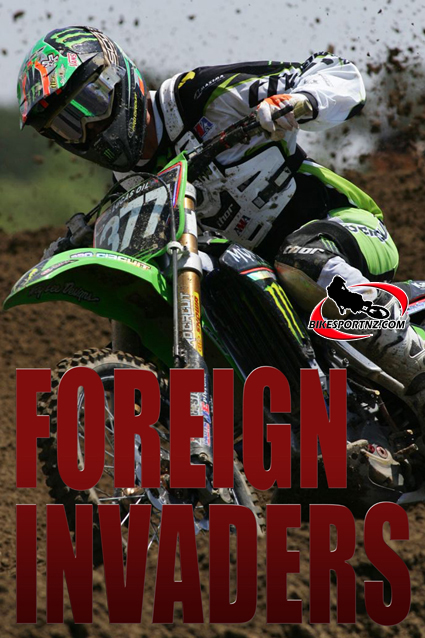 It’s probably enough to make the Americans green with envy.

Foreign riders are invading the United States like never before and it may be a 250cc national motocross championship podium without an American by the time the series all wraps up in September.

French rider Christophe Pourcel, South African Tyla Rattray and Scotsman Dean Wilson are currently 1-2-3 at the top of the 250cc class standings in  the US after the weekend’s fourth round of 12 at Budd’s Creek, Maryland, just south of the nation’s capital, Washington DC.

What’s more, all three riders are on green bikes, the distinctive lime green of the Kawasaki factory.

Former world MX2 champion Pourcel has rarely finished off the podium this year and he was again among the elite when the dust cleared at Budd’s Creek on Sunday afternoon, having finished 1-6 in his two outings on the Monster Energy/Pro Circuit Kawasaki KX250F.

The day was won by flying Scotsman Wilson, a rookie in the American series, after he scored 4-1 placings.

“I just tried to pace myself all day,” said Wilson. “If you pushed too hard you were going to get tired (because of the heat). In the second race, I just wanted to win and I didn’t even know I won the overall. I didn’t find out until after.

“The fans were awesome out there and the track was really tough but I had a lot of fun out there.”

American Justin Barcia (Honda) finished second overall with his 3-2 results and he has moved up from eighth to fourth in the standings, albeit still 22 points behind Wilson.

The championship continues next weekend at Lakewood, Colorado, for round five at Thunder Valley Motocross Park.

Results from round four of 12: