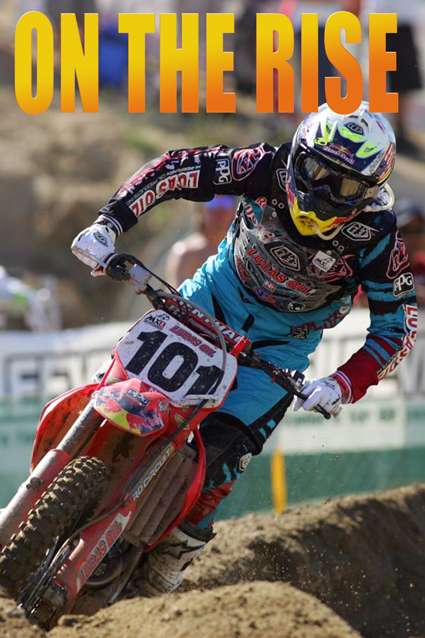 Suzuki star Ryan Dungey is threatening to add the American motocross crown to the supercross crown he won earlier this season and New Zealand’s Ben Townley is up to fifth in the motocross standings after racing at round three of the AMA motocross nationals at the weekend.

Dungey was unbeatable in the two 450cc races in Pennsylvania, while Bay of Plenty rider Townley, this season on the comeback from serious injury, raced his Honda to 4-6 finishes.

This moved Dungey past the previous points leader, Australian Kawasaki rider Chad Reed, to the top of the standings and moved Townley (pictured above) up two places, from seventh to fifth overall.

Racers and fans alike endured a mixture of rain and sun on Saturday as the series made its East Coast debut at High Point Raceway in Pennsylvania. 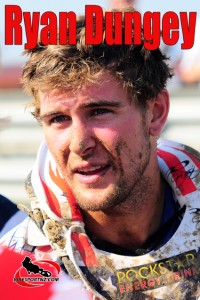 Townley put in a strong performance, with mixed weather conditions putting the Kiwi to the test.

With sixth pick of the gate going into moto one, Townley grabbed a good start and was in a top five position when he was challenged by Tommy Hahn in the opening stages of the race.  Townley took some time to regain his speed but then picked off Hahn and Mike Alessi in the same lap before rain made the High Point circuit muddy and slick.   He had left it too late to reel in fellow Honda racer Andrew Short and had to settle for fourth spot.

The sun was welcomed for moto two as track conditions dried out however Townley could not get the start he needed and was way back in the pack with a mammoth task ahead.  The Kiwi put in an amazing charge from outside the top 20 and, within three laps, had rocketed to seventh place before he stalled his machine and was relegated down the field again.

Townley took the bit between his teeth and once again charged back into the top 10 when another error saw him go down and lose valuable time and positions.

Determined not to give up Townley remounted and put in some blistering laps to finally finish in 6th place, posting the second fastest lap of the race as he came through the field.

“I rode really tight in the first moto and could not find my groove at all so I was not too happy with my performance.  Coming into the weekend, we made some changes to the bike  which we thought would work better for this kind of track but I just didn’t feel accustomed with the settings at all.  When it started to rain towards the end of the moto I felt much better.

“We changed up a lot of things on the bike for the second moto and instantly I felt more comfortable.  My start let me down but I was running such good speed and gelled well with the bike.  I made two mistakes which cost me a possible podium but one consolation is that my speed was good.  Now I just need to work on consistency and putting two solid motos together.  I really enjoy Budd’s Creek, so look forward to improving on my results,” said Townley.

Meanwhile, Kawasaki’s Tyla Rattray, of South Africa, raced to his first career victory in the 250 Class.

Dungey maintained the momentum he garnered last weekend, going 1-1 on the day to establish a four-moto win streak. After grabbing the lead early in moto one, he never looked back but was forced to chase down Honda’s Andrew Short in moto two. Overcoming a multiple-second deficit, he closed in during the closing stages and made the winning pass to lead the final five laps.

“It feels good,” said Dungey. “The track turned out better than I thought after the first moto. I got good starts and put us in a good position to be out front. There were a lot of passing lines today. Sometimes you get caught behind someone and have difficulty moving through the pack and that’s where starts play a big role.”

Reed suffered from misfortune en route to an 18th-place effort. Short held on for second overall (3-2) while Honda’s Brett Metcalfe, of Australia, grabbed his first career podium finish in the premier class in third (6-3).

The Lucas Oil AMA Pro Motocross Championship continues next weekend from Mechanicsville, Maryland, for round four and the MotoTees.com Budds Creek National from Budds Creek MX Park on June 19.