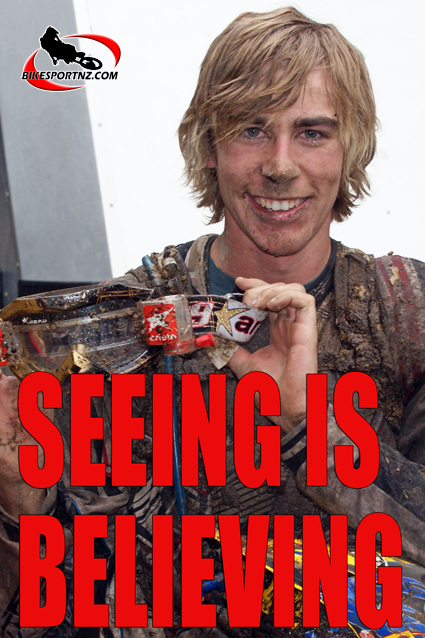 Husqvarna has cleaned up its second series in as many weeks.

Two weeks after brothers Mitchell and Damon Nield battled cousins Karl and Chris Power at the final round of the Power Adventure  Two-man series —  taking the win on the day and also the series overall win — Husqvarna is again on the podium at the Dirt Guide series.

At the final round of the successful Dirt Guide Cross Country series, despite a bad start of about 6th place, and having to negotiate a pile of downed riders, Damon Nield gave chase to the front-runners.

Mokau’s Adrian Smith (Yamaha) had the holeshot with Karl Power on his rear wheel.

About halfway through the first lap, Karl buried his bike in a big mudhole and Damon (pictured above) passed him. It took longer to catch Smith but he managed to stick a pass just before the end of the first lap, so Damon came back in the lead.

The next few laps were a backwards and forwards battle and by the final lap Adrian had the lead on Karl, with Damon in third.  Unfortunately Smith had an issue with fuel, (really it was a lack of fuel that caused the issue) and Karl took the lead.  He finished the day in 1st, with Damon coming in 2nd.  Napier’s Lance O’Dea (Suzuki) came in 3rd with Smith ending up 4th.

Mitchell Nield’s day didn’t go to plan, he also buried his bike in the mudhole, and as he had ridden other rounds of the series in different classes, wasn’t in the running for a series win.

On the day, Damon Nield’s second place on his Husqvarna CR125 was a good enough result for him to take the series win in both Expert 125 class and series overall.

Ryan Hoskins, also on a Husqvarna CR125, won the junior race on the day, and also the 14-16 yrs class and series win in the juniors, making it a brilliant series for Team Husqvarna.