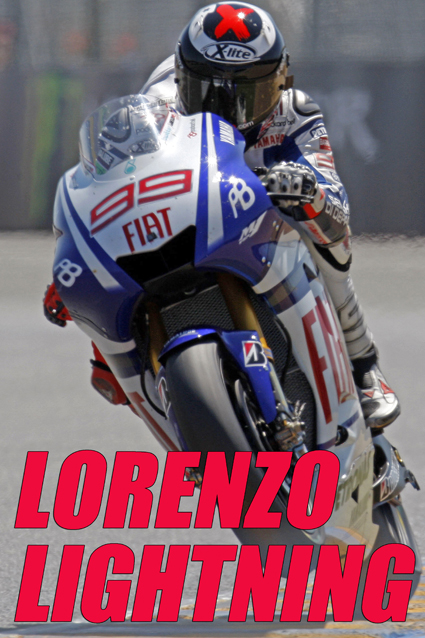 Yamaha’s Jorge Lorenzo has extended his 2010 title lead by claiming back-to-back MotoGP race wins for the first time in his career at round four in Le Mans, France, on Sunday.

He first had to overtake and then break away from, team-mate and reigning champion Valentino Rossi.

Rossi had retained his pole advantage into turn one, while Lorenzo lost a position to Dani Pedrosa, but was back in second by the end of the first lap – after which the top three began to edge away.

Meanwhile, Casey Stoner had dropped back behind Ducati team-mate Nicky Hayden to sit fifth on lap one – took fourth back from the American on lap two, then crashed on lap three, after sliding out on the exit of a right hander.

Having also crashed out, while leading, at Qatar, it was a disastrous result for the Australian who leaves Le Mans with only eleven points – for his fifth place at Jerez – out of a potential 75. Small wonder Stoner was seen with his head in his hands in the Ducati pits.

Back on track and Rossi began to feel ever increasing pressure from Lorenzo, who finally attacked on lap 8 of 24, through turn one.

Rossi resisted, and was back ahead by the exit of the first chicane, but a patient Lorenzo adjusted his tactics and his second attempt at the lead, also into the first chicane on lap 12, proved unstoppable.

Thereafter, Lorenzo simply rode into the distance, eventually taking the chequered flag with a 5.672sec victory margin over Rossi. Rossi said his shoulder had not been perfect, but that grip out of the corners was what had lost him the race.

Pedrosa remained in third for almost the entire race, but was caught by Repsol Honda team-mate Andrea Dovizioso and Hayden in the closing stages. Pedrosa began to run wide and Dovizioso got revenge for last year’s race, when Dani took a rostrum from him, by finally getting past on the very last lap.

Worst was to follow for Pedrosa, who the found Hayden in his wheeltracks and, after running wide once again, lost fourth place to the American – who has now finished fourth in all three rounds this year.

San Carlo Honda Gresini’s Marco Melandri got a good start to hold sixth at the end of lap one, a position he retained at the flag for his best result of the season, while home hero Randy de Puniet collected seventh on his LCR Honda.

Top rookie was Hector Barbera, who rode an aggressive race to a commendable eighth, just in front of countryman Aleix Espargaro (Pramac). The two other 250 graduates, Marco Simoncelli and Hiroshi Aoyama were tenth and eleventh.

Twelfth placed Colin Edwards was the only Tech 3 rider to reach the flag, in any race, on Sunday. The French-based team’s Moto2 riders both crashed out of their race, while Ben Spies did likewise – for his second DNF in a row – while holding eleventh on lap 7 of the MotoGP main event.

The lone starting Suzuki of Loris Capirossi also crashed out at around the same time, while the injured Mika Kallio (Pramac) rode to a lonely 13th and last.

All of which means that Lorenzo is now nine points ahead of Rossi after three of 18 rounds, with Stoner only 13th heading into the Italian Grand Prix – a home round for Ducati and Rossi.