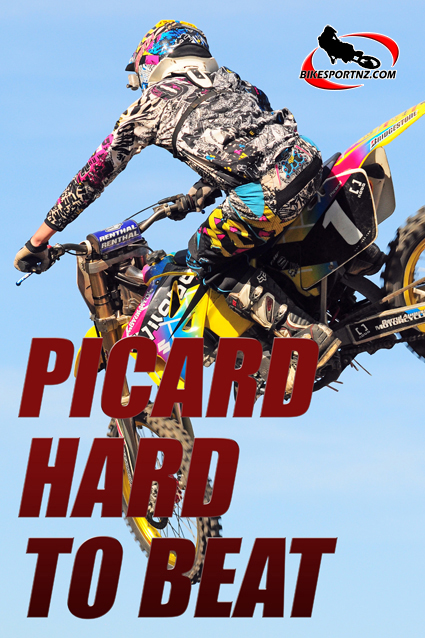 Is there any way to stop this man?

That’s very likely to be the question being asked after Atiamuri’s Dion Picard swept all before him at the New Zealand Junior Motocross Championships near Blenheim at the weekend, winning his third national motocross crown.

Nobody had an answer to the 14-year-old Picard over the three days as he took his Suzuki RM125 to five straight wins, easily defending the 12-14 years’ 125cc crown he also won last year.

Picard is no stranger to winning motocross races — he won the 8-10 years’ 85cc title in 2006 – but no campaign has been quite so comprehensive as the 1-1-1-1-1 score-line he achieved this season.

He didn’t have the lead from the start of every race but was typically in front after just half a lap and, from there, he was never headed, putting in lap times that were 2-3 seconds quicker than his main rivals and stretching his advantage.

“I liked the track … it was really fast and my Suzuki was probably the fastest bike there and the Bridgestones (tyres) were great too,” said Picard, a year 10 pupil at John Paul College in Rotorua.

“It sounds like I won it easily but it wasn’t really like that. Sure, I felt confident but I was very nervous at the start of the weekend. Last year was my first nationals on a 125cc bike and nobody knew what to expect of me, not even me. But this year, with the No.1 on my bike, the expectations were very high.”

Picard now looks ahead to stepping up to the older age group when he turns 15 at the end of July and he’s confident he can again put his Darryl August-sponsored RM125 on the podium in that class as well.

“But I’ll be up against riders like Kaukapakapa’s Josh Jack (Suzuki) in the next age group, so that’s not going to be easy.”

Picard is meanwhile preparing to head across the Tasman to tackle the Australian Junior Motocross Championships in September.

“It’ll be my first time over there and I’m really looking forward to that.”