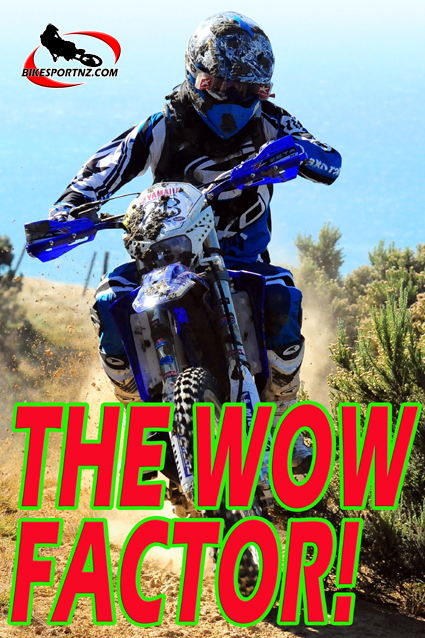 The hits just keep on coming for Taranaki’s Adrian Smith and his tiny Yamaha YZ144.

Riding what is basically just a bored-out 125cc motocross bike, the 24-year-old Mokau farmer has been stunning the motorcycle cross-country community this summer with his giant-killing rides, and he produced another David versus Goliath act at round three of the North Island Cross-country Championships near Raglan, 60 kilometres east of Hamilton, on Saturday.

“I had a shocking start and was behind about 50 riders. But, by halfway through lap one, I was up to second, behind Wellington’s Rory Mead (Yamaha YZ250),” said Smith.

“Rory had already put a big gap on the field and I lost a bit of time because I had to come in for fuel … it’s only a small tank on the YZ144.

“I took over the lead on the third lap when Rory came in for his fuel stop. I quickly built up a two-minute lead and it was pretty comfortable for me from then on and I won fairly easily.”

Round two winner Mead later ran out of fuel and was forced to retire, while Huntly’s Michael Vining (Suzuki RM-Z450) finished as runner-up to Smith with Auckland’s Shaun Fogarty (KTM 450) taking third spot

Ramsey leads the series after three rounds – he’s finished 2-3-4 thus far – and is six points clear of Fogarty in the chase for the title.

“I had a few people coming up and talking to me about the bike after that one. I think a few people are quite impressed with the little bike,” said Smith.

“I missed round two of this series and will miss the opening round of the New Zealand Cross-country Championships (at Waipukurau on April 11) too because I’m racing instead in Australia, at the Australian Four-day Enduro Championships.

“I really want to win the cross-country nationals and I can still do that … only three of the four rounds count for points with riders able to drop their worst score. By missing round one at Waipukurau it just means I can’t afford to make any mistakes at the other three events.”