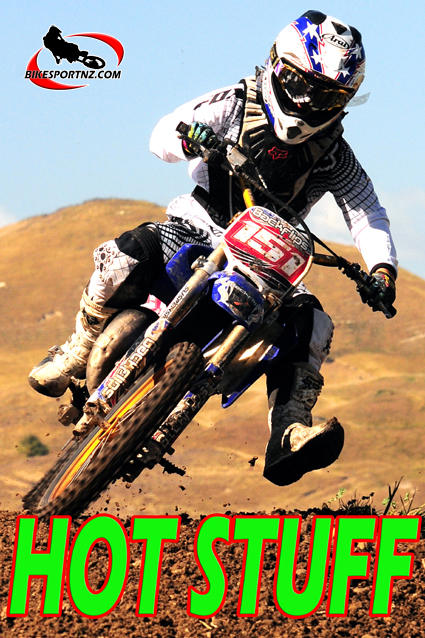 Otago girl racer Courtney Duncan is stepping up the pace ahead of this year’s junior motocross nationals.

The 85cc world No.6 again showed the young men no mercy as she raced her way to the top step of the podium at the North Island Motocross Championships’ opening round in Hawke’s Bay over the weekend.

The 14-year-old from Palmerston took her Mike Gould and Backflips-sponsored Yamaha YZ85 to 1-2-1 in her three outings on Saturday, easily placing her top of the standings in the 13-16 years’ 85cc class, ahead of Matamata’s Jacob Kneebone (Yamaha) and Pahiatua’s Scott Sowry (Kawasaki).

That performance possibly rang a few alarm bells for her rivals too, with the nationals just a few weeks away, near Blenheim on April 16-18, and young Duncan showing some of the best form of her life.

The East Otago School year 10 pupil could well have made it a clean sweep of wins in Hastings but for a crash at the start of race two.

She powered her way from last place to eventually claim the runner-up spot in that race in a performance that demonstrated the skill, strength and tenacity that has already made her a household name in the sport in New Zealand.

“I really want to win my class at the nationals but, actually, I’d be happy to finish in the top two or three. I am picking (Rangiora’s national champion) Micah McGoldrick as my biggest threat.

“I’m pretty good friends with Micah off the track but, on the track, I don’t have any friends,” she smiled.

“I only finished eighth in this class in New Zealand last year (before going on to finish a remarkable No.6 in the world) because I had a couple of DNFs (non finishes).

“I rode well at the Junior World Motocross Championships though,” she said. “I still don’t know if I’m racing the juniors worlds in France later this year … it all depends on how fast I think I’m going.”