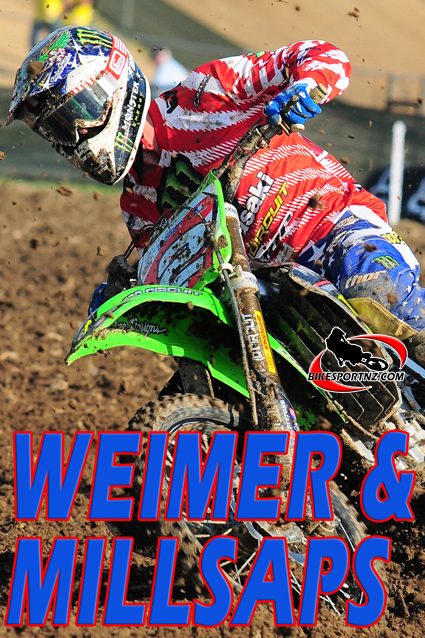 San Diego’s Qualcomm Stadium was the site for the fifth round of the 2010 Monster Energy AMA Supercross on Saturday night.

The FIM World Championship attracted more than 51,000 fans to the Southern California track and they braved the weather as Davi Millsaps captured the AMA Supercross class win and Kawasaki’s Jake Weimer (pictured above) won his fourth AMA Supercross Lites class victory in five races of the Western Regional Championship.

In the first corner, points leader and Suzuki rider Ryan Dungey lost traction with his rear wheel and fell, collecting several other riders. After remounting mid-pack, Dungey fell again heading to the finish-line double and dropped to the tail end of the field.

At the front, Millsaps made his move for the lead on lap three and never looked back. Yamaha’s Josh Hill finished second while Tedesco brought home third.

“Yeah it was a good night for me,” said Millsaps. “I came out on top. American Honda is the best crew in world. The tack was slick. You had to just be smooth, consistent and make no mistakes and that’s what I did. It was such an amazing race and I can’t explain how good it feels.”

Australian Daniel Reardon finished 13th while his compatriot Michael Byrne crashed out mid race. Andrew Short suffered a heavy crash on the second lap and took no furtehr part in the race.

As the AMA Supercross Lites class blasted out of the gates, Honda’s Trey Canard grabbed the holeshot with Weimer and team-mate Blake Wharton in second and third, respectively. Canard found trouble and went down on the first lap, allowing Weimer to get by and lead the rest of the way, inching closer to the Western Regional title.

“Yeah it was a good night,” said Weimer. “I was able to get a good start right behind Trey (Canard) and unfortunately he went down. I was able to get by and I just tried to be consistent from there. The track was definitely tricky but it held up well.”

Dungey currently holds a four-point advantage over Hill in the AMA Supercross standings while Weimer leads Canard by 26 points.