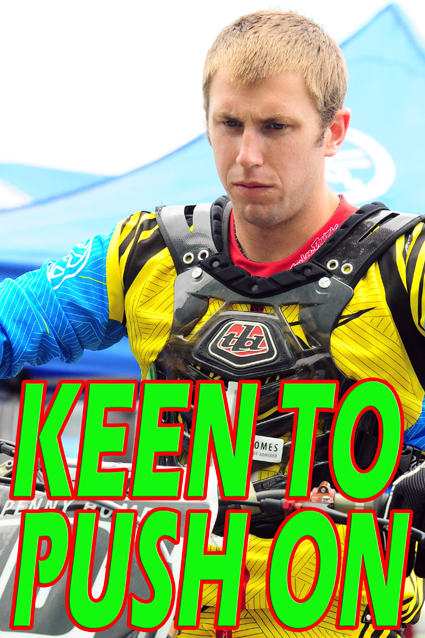 Ben Townley is up and running and he has no intention of stopping.

Bay of Plenty’s Townley — who won the 2004 motocross world championship before heading to the United States to win the East Coast Lites Supercross crown in America in 2007 — had virtually been sidelined more than two years after suffering a serious shoulder injury in the US in late 2007.

But, since just before Christmas, he has been back in action and fast heading towards full fitness again after the enforced layoff.

It was a huge confidence boost for the 25-year-old Tauranga-based rider when he won the opening round of four in the New Zealand Supercross Championships near Timaru on Wednesday night.

But there’s no time to catch his breath with the next round set for this Sunday night, just a few hours’ drive up the road, at Motueka’s popular Rat Track facility.

Townley ended the evening with 55 points, five points more than Christchurch’s McDonald, so there’s really nothing to separate the two riders as Sunday’s action at Motueka will surely prove.

“I qualified fastest and felt pretty good all night (at Timaru),” said Townley.

“I stalled the bike on lap one of race one but came back through the entire field to win that. It felt awesome. Race two I was battling with (Mount Maunganui’s) Cody Cooper and we came together on the track and got tangled. We both went down. I think I did okay to salvage fourth place from that. Race three was pretty straightforward.

“I’m looking forward to the other rounds now and hopefully building on my points lead,” he said.

Meanwhile, Phillips did double duty in Timaru and leads the senior lites (250cc) class, ahead of defending champion Scott Columb (Suzuki), of Queenstown.

The riders will warm up for Sunday’s racing by contesting the one-round South Islands Supercross Championships, at the same Motueka venue on Saturday evening.

The national supercross championships next head to Tokoroa for round three the following weekend, January 16, and wrap up at the TelstraClear Events Centre, Manukau, on January 23.