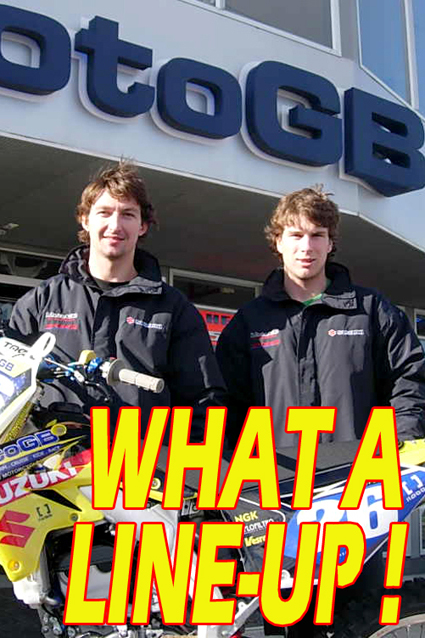 Watch out for the yellow peril at this year’s New Zealand Motocross Championships.

In addition to Kiwi legends Daryl Hurley and Scott Columb, Suzuki will also have Mount Maunganui’s Cody Cooper racing for them this season.

Riding out of Bay of Plenty’s fabulous MotoGB Suzuki enclosure, Kiwi international Cooper will race an RM-Z450 in the nationals, starting near Timaru this weekend.

Cooper’s MotoGB team-mate will be the talented Davi Fisher (pictured above, right, with Cody Cooper) racing in the MX2 class.

MotoGB director Mike Fisher is the team manager, while Blair Meyer will be head technician for Davi and Ben Townley will be assisting Cooper at round one.

Cooper has signed to ride a Suzuki through MotoGB for the nationals as well as Hamilton SX in November.

“We are thrilled with this 09 team and look forward to a good nationals,” said MotoGB’s Andrew Hardisty, himself a former national motocross champion.

Cooper finished a very creditable eighth overall in the AMA Motocross Championships in the United States this season but it was his superb fifth overall in that series in 2008 that perhaps shines out as his crowning glory in a career that is simply glowing with kudos.

He raced a privateer Suzuki RM-Z450 in that glorious 2008 season.