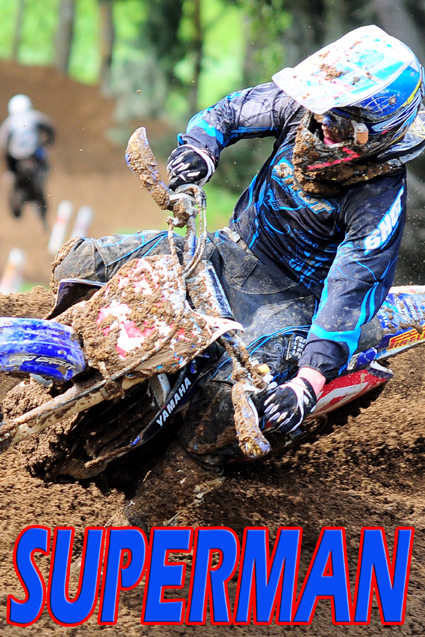 The future of New Zealand motocross seems to be in good hands.

Although multi-time national champion Darryll King has now reached the grand old age of 40 and he is easing back on his top-level racing commitments, the two-time world No.2 is still having a huge influence on the sport.

Darryll King’s talent spotting and inspired selection reaped instant rewards with Clark stunning the glamour MX1 class at the second round of four in the Demon Energy New Zealand Motocross Championships near Rotorua on Sunday.

Clark (pictured above) was the talk of the paddock, an outstanding performer in just his first outing on an MX1 machine and his debut ride for Yamaha after many years racing a Honda.

Clark led from start to finish to win the day’s first MX1 race, onlookers open-mouthed as he left some of the sport’s established stars in his wake. As the day wore on, the 19-year-old Clark continued to spray mud over the MX1 glitterati, finishing the day runner-up, just five points behind new series leader Justin McDonald (Honda), of Christchurch.

McDonald finished the day runner-up in all three MX1 races at Rotorua on Sunday, with three different riders taking top step of the podium throughout the day – Clark in race one, Mount Maunganui’s Cody Cooper (Suzuki) in race two and Mount Maunganui’s Mason Phillips (Kawasaki) in race three.

Clark had scored no points at the championship opener near Timaru a week earlier but made up lost ground with his showing at Rotorua on Sunday and, on the strength alone of Sunday’s debut ride for Yamaha, he suddenly finds himself eighth in the MX1 championship standings.

“I didn’t have any pressure to perform and I just wanted to finish the day in one piece,” said Clark afterwards.

“It’s a big step up to take on an MX1 bike. I’ve only had two days to get used to it but I love it already,” he said. “This is a dream come true to be picked up by a team like this.

“The day has been awesome. I was nowhere in the championship but now a top-ten is very much on the cards.”

“I think he is one of the riders of the future,” said King. “I’m pretty stoked to have a rider in all three classes (with Cambridge’s Kieran Leigh completing the Subway Yamaha line-up, riding in the MX2 class). We really needed a 450 rider with the new Yamaha YZF450 set to debut in New Zealand in a few weeks.”

The MX2 class also had a shake-up at Rotorua as Queenstown’s Scott Columb (Suzuki) come on strong to bring himself level with home town rider Michael Phillips (Honda) at the top of the standings.

Columb won the first two MX2 races but then struck problems with his goggles in the third race. However, he still managed to fight back and finish sixth in that final race.

Rotorua’s Phillips finished 2-2-5 in his three outings, meaning there’s nothing to separate Columb from Phillips in the points as the riders head to round three at Patetonga, near Morrinsville, on November 8.

Meanwhile, the defending champion in the 125cc class, Damien King, was simply too good for his rivals on Sunday and he has snatched the series lead from round-one winner Ethan Martens (KTM). The 33-year-old King was unbeaten on Sunday.

However, Waitakere youngster Martens still leads the race-within-a-race for under-21 age-group honours, ahead of Mangakino’s Kayne Lamont (Yamaha)