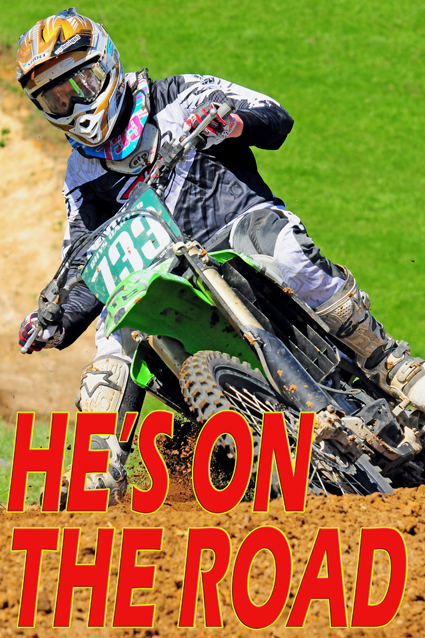 He’s out of the country and intends to stay away just a little bit longer.

Palmerston North’s Rhys Carter raced the eighth and final round of the Australian Motocross Championships at Coolum, Queensland, at the weekend, finishing a creditable 19th overall in the Pro Lites class, thanks to 20-16-18 results.

But now an opportunity has arisen for him to race another international event, this time in Indonesia.

“Last Thursday I got a phone call from a man in Melbourne and he asked me if I would like to go and ride in Indonesia at the AX 100.

“I got on the phone made a couple of calls and, in an hour, my trip from racing in Australia got extended to racing in Indonesia. I fly over there today (on Wednesday) from Australia and race for the weekend and then fly home to New Zealand next Tuesday. So I now will get a bit more experience racing overseas which is what I have been waiting for. A big thanks goes to Mike Menchi for putting my name forward to go over and race which was good of him to put my name forward.”

As for Carter’s Australian experience, he gives us this summary:

“Well my first experience of racing in Australia is over just like that and it was definitely a wake-up a call and I also learned a lot racing here to which is always good.

“It was a sand track at Coolum, which was good as I had been doing a lot of sand riding back home.”

“I felt more at home on the bike this weekend and felt comfortable on it which was good. The way they did it this weekend for qualifying was that 11th in points down would qualify together and the top 10 would go with the top 10 450 class. I qualified 8th in my group which meant I was 18th overall which was a bit better than 27th like last weekend.

“Moto one I got a shocking start and was nearly dead last going into the first corner and by the time I come round on the first lap I was moved into 17th and feeling good. I for some stupid reason stalled the bike coming into a corner which drop me back way out of the top 20 and making me work again to get through the pack.

“I worked my way back into the top 20 and was feeling good making alot of passes and then the front wheel washed out and put me down and catching up again and by the time the race finished I was into 20th.

“Moto two and yet again Ii got another shocking start and found myself at the rear of the field working through the pack. I was making passes real fast in the first few laps and about 10 minutes into the race I dropped it and lost a lot of position putting me just outside the top 20 and pushing as hard as I could I worked my way up 10 16th place right in behind a pack of ride that went all the way up to 10th.

For moto three, the race was shortened due to a big crash and, before the restart, they told us the moto was going to be only 10 minutes. It was all or nothing in this race and with another shocking start I was working through the pack trying to get up as far as I could to get some points. I managed to work my way up to 18th by the end of the race right in behind a big bunch of riders.

“Overall I was 19th. It was a good trip and the bike set-up with SP Motosports was awesome, my bike was fast and it handled so good and, if there was a problem with anything, Powely was there to sort it out and make sure I was happy with everything. SP Motosports differently made I alot easier on me just having to turn up and ride the bike, everyone and the tent were super friendly and made it alot of fun for the first time experience.

“A big thanks has to go out to Nick Saunders for putting his time into me once again and taking time off work to come over and help me out and make sure the bike was looked after and help me out with lines and everything it was awesome and it made it alot easier with him coming to the races as he has done it all before.

“Also my parents and little brother for coming over and supporting me and definitely for paying for the hole trip with out my parents it wouldn’t have been able to happen and can’t thank them enough.

“Thanks too go to my boss Brendon Tootell for giving me time off to come over and supporting me through everything from getting up in the mourning before work to go training to helping me with parts and accessories and bikes it awesome to have a boss like him. And, last but not least, everyone else that has made this possible for with all the support you have given me over the years and I am very thankful for everything you have done for me.”