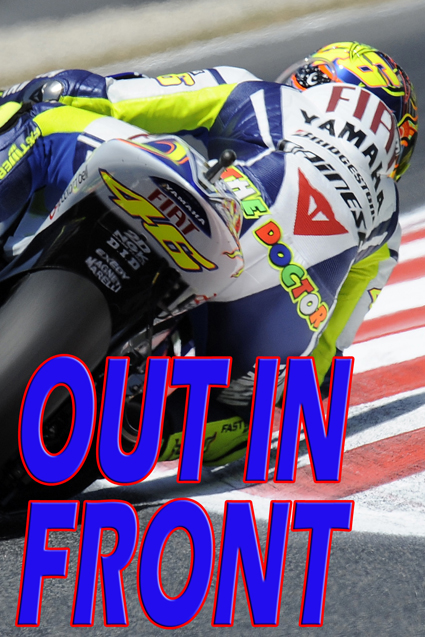 Valentino Rossi is now alone at the top of the MotoGP world standings.

The Fiat Yamaha rider unfurled a banner with photos from his 99 previous wins after winning his landmark 100th Grand Prix in dominant style on the Circuit van Drenthe, the “Cathedral” of racing in Assen, Holland.

Rossi took the lead from Ducati Marlboro’s Casey Stoner on the second of 26 laps and gently eased away. After passing Stoner on the fifth lap, Rossi’s team-mate Jorge Lorenzo made a run at him, but Rossi was much quicker in the fast section of the track at the end of the lap. Every time Lorenzo closed in, Rossi would pull out a few tenths.

Stoner was a solitary third at the weekend, 23.113 seconds from Rossi, who broke the three-way championship deadlock. Rossi now leads with 131 to 126 for Lorenzo and 122 for Stoner.

Then came the best battle of the day and one of the best of the season. The six-way fight for sixth went for the entire race, with drama coming on the final lap. When the dust had cleared, literally, Monster Yamaha Tech 3’s James Toseland was sixth, a career best in front of, in short order, LCR Honda’s Randy De Puniet, San Carlo Honda Gresini’s Toni Elias, Ducati Marlboro’s Nicky Hayden, and Rizla Suzuki’s Loris Capirossi. Missing from the group was Pramac Racing’s Mika Kallio who crashed out of seventh on the final lap. Hayden had been at the front of the pack, then seventh when he ran off the track and dropped to eleventh. He recovered two spots to finish ninth.

The day was a disaster for the Repsol Honda team. Dani Pedrosa crashed in turn one on the fifth lap while in fourth. Team-mate Andrea Dovizioso crashed out of fourth in the same corner on the 11th lap.