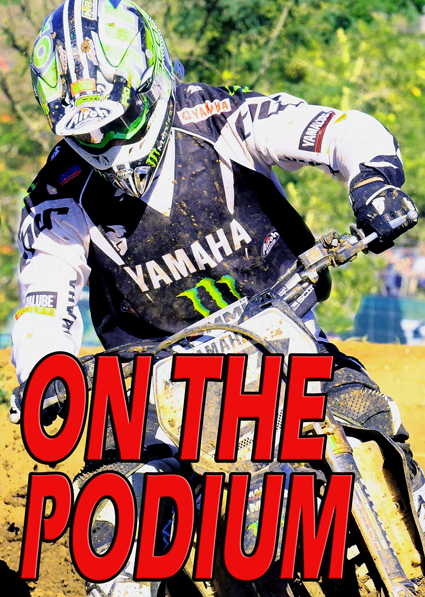 Kiwi hero Josh Coppins is back.

The 32-year-old factory Yamaha star raced his way onto the podium at the Latvian Motocross Grand Prix at Kegums, the 10th round of 15 in the world championships, at the weekend.

It was his first podium finish since he won the second round of the world championship in Bulgaria in April.

Coppins finished fourth and second in his two MX1 races at Kegums, placing him third overall for the GP, just one point less than the No.2 man, Belgian Honda rider Clement Desalle.

The weekend’s result did not alter Coppins’ overall championship standing — he remains fourth overall with just five rounds remaining — but it does strengthen his position considerably.

In Saturday’s short qualifying race, Coppins got a reasonable jump out the gate, heading through the first turn just inside the top 10. With the top five riders all still within striking distance of this year’s MX1 championship everyone was pushing as hard as possible to get the best possible gate pick for the two Sunday GP races.

Racing hard through the pack, Coppins clawed his way into 6th place, securing a good starting position for Sunday.

As the gate dropped for the first moto on Sunday the crowd watched in awe as the MX1 ‘field of stars’ launched themselves into the first corner. It was Belgian Suzuki rider Ken de Dycker who got the early advantage, with Germany’s Max Nagl (KTM) right on him.

Coppins at this point was in 7th position, fighting hard for track position with championship leader Cairoli.

By lap four the determined Kiwi had managed to get up into 5th place, before losing the battle to Cairoli and dropping back into 6th. The next person in the ‘crosshairs’ was team-mate Philippaerts, Coppins wasted no time in hunting him down and eventually getting past. Coppins continued his forward momentum to the very end, crossing the chequered flag in fourth position.

With the track getting really rough throughout the day and the temperature rising, race two was going to be a show of strength, and an ultra-fit Coppins knew these conditions would give him the upper hand on many of the riders. With a slightly better start this time, Coppins rounded up the opening lap in 5th position, as he settled into a good rhythm.

On lap five the man they call ‘Lizzard’ started to turn up the pressure on the other riders, at a point where all except Cairoli looked to be tiring.

Coppins looked fresh as he closed down and passed his rivals one by one. By lap 14 Coppins had closed in on Desalle and made the pass for third spot, then just one lap later did the same to de Dycker to take over second position and put himself on the podium for the Latvian GP.

“My goal was to improve from Teutschenthal (Germany) last weekend and I managed to do that today.

“I’m feeling strong and I know I have it in me to end off the championship with a fight.  There are some tough tracks coming up which are going to sort the men from the boys – we saw it today as well. I’m looking forward to Sweden as well. I have won there before and will be focusing on a podium spot once again.”

In the MX2 class, series leader Marvin Musquin (KTM) was second on the day, actually collecting as many points as overall winner Rui Goncalves, but Goncalves (KTM) won the day on countback.

The result lifted Portugal’s Goncalves to third in the championship standings, while French rider Gautier Paulin (Kawasaki) was third overall at Kegums to remain second in the series.

Meanwhile, Mats Nilsson won both heats at this penultimate round of the FIM Veterans’ World Cup to pull away in the points standings. 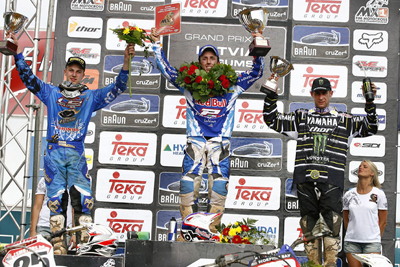 Despite taking the runner up spot in a breathtaking first heat, Yamaha Red Bull De Carli’s Cairoli showed he could be the man to beat and so it was in heat two, with the Italian wrapping up the fourth win of the season and 29th of his career.

Coming up through the pack after a bad start, Cairoli worked his way through the pack in moto one to reach the tail of leader Desalle, whom Cairoli had tangled up with in qualifying. The Italian started putting pressure on the Belgian and tried an impressive final lap attack to clock the lap record, though Desalle remained in first by 0.2 seconds. Cairoli struggled again at the start to the second heat but this time he managed to move past Desalle a lot earlier and take the eventual victory.

LS Motors Honda’s Desalle won his first career heat after a strong opening moto but a technical problem forced the youngster to end heat two in fifth after he held an early lead.

Moving up to second after a late charge in the final moto, Yamaha Monster Energy Motocross’ Coppins secured the overall podium with third. The Kiwi finished behind Nagl in moto one but the Red Bull KTM Factory Racing German struggled in heat two finishing a distant sixth and stopping a three podium row to take fourth overall in Latvia.

A disappointed Teka Suzuki WMX1’s De Dycker completed the top five with a first moto crash affecting the Latvian weekend of the sole rider remained in the team after team-mate Steve Ramon’s injury in Valkenswaard.

Philippaerts, who lost the runner-up spot in the Championship to Nagl, was sixth overall at Kegums, ahead of Aigar Leok while his cousin Tanel Leok was 11th due to a dnf in heat one – after a crash the Estonian was not able to restart his bike.

Lauris Freibergs left his home GP being the best Latvian on track courtesy of a 14th overall finish.

Taking his third season’s win and even the third position in the Championship Red Bull KTM Factory Racing’s Goncalves left Latvia with a confidence boost for the remainder of the 2009 season.

Saturday’s pole winner took two great starts but encountered mixed fortunes during the heats starting off with the opening moto, where he dropped down from first to fifth but a late charge gave the Portuguese the runner up spot at the chequered flag.

His team-mate Musquin won heat one but was forced to settle for second in the last heat as Goncalves was the strongest and dominated the whole race to wrap up the overall ahead of Musquin – second in the final moto.

Other than Goncalves, another man coming back to the podium at Kegums was runner-up in the championship, Paulin. The Bud Racing Kawasaki Frenchman took third overall courtesy of fifth in heat one and a strong third in moto two.

Teka Suzuki Europe World MX2’s Ken Roczen went from the German GP win of last weekend to a fourth place overall in Latvia, where his Grand Prix started with a solid third place in heat one.

Yamaha Monster Energy Ricci Motocross’ David Guarneri continued to ride consistently as he wrapped up a fifth place overall ahead of Joel Roelants. Though the Italian lost the third place in the championship to Goncalves.

Dennis Verbruggen was a positive seventh ahead of Evgeny Bobryshev, Marcus Schiffer and Steven Frossard. The latter, who was among the protagonists of heat one, finished moto two with a disappointing dnf after a crash in front of the pit lane straight.

Home rider Matiss Karro — the Suzuki rider well known to Kiwi race fans after his visit to Taupo last year — rounded off a positive weekend with a 12th place overall despite he qualified in 33rd after a crash in his heat.

The second season’s win of Nilsson unveiled to be the most important for the Swedish veteran who exploited the absence of Peter Iven – out with a broken leg – to snatch the red plate from the Belgian and take a step forward towards the eventual World Cup victory as just one round is left.

With Nilsson winning both heats, Erwin Hendrickx settled for two runner-up finishes to mount on the second step of the podium which was completed by Christophe Lhertiteau.