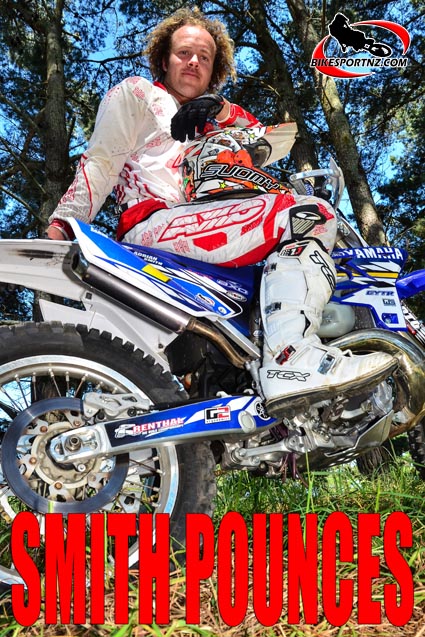 The win string has been snapped.

Auckland’s Chris Birch continues to lead the KTM-sponsored New Zealand Enduro Championship standings after four of six rounds, but his run of wins stretching back to the start of last season has finally been halted.

The national enduro champion in 2012, Mokau’s Adrian Smith stepped up the pace to win Saturday’s fourth round of six in the 2014 series on rugged farmland on Banks Peninsular, about 90-minutes’ drive from Christchurch.

Birch had won the previous nine national enduro championship rounds, compiling an unbeaten six-in-a-row to win the title last season and then following that up with three straight wins to kick off his 2014 campaign.

With Birch (KTM 350XC-F) finishing runner-up on Saturday, it means his season score-line now is 1-1-1-2, while Smith has scored 12-2-2-1 results, leaving Birch still firmly in control of the battle for overall honours.

However, with only five of the six rounds to be counted and riders to discard their worst result, it means Smith is still mathematically well positioned to steal the crown, although he will also need to win both remaining rounds of the 2014 series.

“The course was very rocky,” said the 28-year-old Smith afterwards.

“It was open in some places too, but never really fast and it was quite technical. The elevation changes were quite dramatic and, at one stage, we were up in the clouds and visibility was difficult.”

Following the weekend’s event, the riders will now head north again, for round five at Oparau, near Kawhia, on April 19 and, finally, it all wraps up at Waimiha, in the King Country, on May 10.