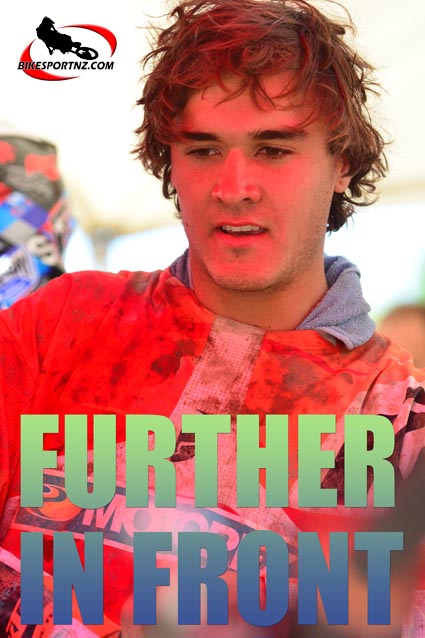 KTM’s Todd Waters has extended his lead in the MX1 class after an eventful round two of the Australian Motocross Championships at Murray Bridge in South Australia at the weekend.

“My starts were good all day,” Cooper said. “The first moto went to plan, although I got a bit of arm-pump like most people seemed to, but then in the second race I just went backwards.

“It was a difficult moto, but we’ll do some testing in Newcastle this week and try to come back stronger next weekend for round three.”

Fellow Kiwis Kayne Lamont (KTM) and Rhys Carter (Suzuki) finished ninth and eighth respectively in the MX2 class on Sunday and they are now sixth and 13th in the championship chase.

A crowd of about 3000 was on hand to watch as first on the track was the Motul MX2 championship class, with round one winner and 2012 No.2 man Luke Styke (Serco Yamaha) displaying the red leader’s plate.

Styke took a fall in moto one and worked his way from the back through to third place. He came out swinging in moto two to take the win, finishing overall runner-up on the day and maintaining his series red plate.

His team-mate, MX2 rookie Luke Clout, took the win in moto one and finished second in moto two, for the overall and his first MX2 class win.

Moto one was a real mixed bag with both Monster Energy Kawasaki riders suffering DNFs and plenty of other riders taking small falls.

Waters was the pace setter but a few mistakes had him finish third. Moto two was won by Waters and that gave him the round win to make it two from two.

Second overall was Scotland’s Billy Mackenzie (Yamaha) backing up his performance from round one and filling the last spot on the podium was Campbell Mining’s Jake Moss.

Murray Bridge played host to the opening round of the Yamaha Australian Pro Quads class and they really turned up the heat with some great action.

Moto one was red flagged on the first lap with defending champion Gaisford taking a heavy fall.

With Gaisford out, it opened the championship up to be anybody’s day.

Yamaha mounted Christopher Bosnakis, (WA) showed that he will be a name in the Pro Quads, the 16-year-old won both motos to take the overall from Victorian Honda mounted Jake van Vliet and rounding out the podium was Adam Larson in third place.

MX1 class championship standings after round two of 10:

MX2 class championship standings after round two of 10: