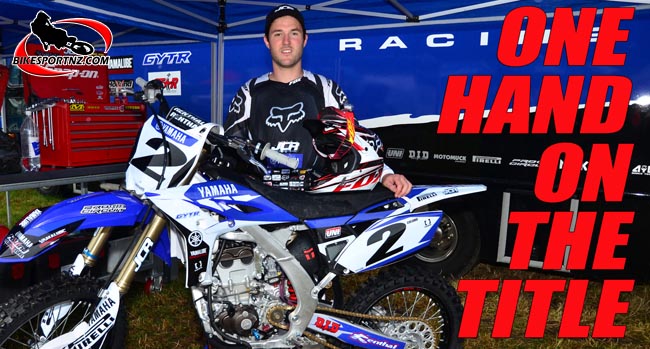 Even though he is injured, Queenstown’s Scotty Columb won’t be holding anything back when he races this weekend.

The 29-year-old JCR Yamaha Racing Team star already has a firm grip on the national MX2 (250cc) title after two out of four rounds of the New Zealand Motocross Championships and he heads to Harrisville, near Pukekohe, for round three on Sunday with just one thing on his mind … to win.

But even with a massive 16-point lead over his nearest challenger – and second or third placings possibly enough to get the job done now – the South Island hero will still be pushing on the unforgiving Harrisville circuit.

“I’m halfway there now and just need to keep on doing what I’m doing,” said Columb.

And that means putting his immaculate blue and white Yamaha YZ250F bike out front on the race track and keeping himself top of the podium.

But he’s also a realist.

“Anything can happen in motocross, so I’m not taking anything for granted and I still have a very sore thumb.

“I hurt it during training just before round two at Patetonga, (nearly two weeks ago) and we built a special cast for it, just to brace it and give it strength. That meant I was not so flash at Patetonga. My riding was a little awkward and my hand is quite painful, but I still managed reasonable results.

“I’m still not 100 percent healthy but my injury has had two weeks to calm down, so I will be going hard. I am focussed on winning some races this weekend.

Any mistakes by Columb and Australian rider Brock Winston (CMR Red Bull KTM 250SX) will be ready to pounce. Winston is 16 points behind Columb but even a small mishap could see that deficit wiped out.

Third in the standings is Mount Maunganui’s Rhys Carter (Moto City Suzuki RM-Z250), another 15 points further back, and he will also be keen to attack at Harrisville.

It is possibly all up to Columb and how well he copes with his injury, as much as it might be about raw speed or the fickle finger of fate.

“I can’t hold onto the bike as well as I’d like, so we’ve made some suspension adjustments to soften things a little,” Columb revealed. “The big jumps at Harrisville won’t be too much of a problem, as long as I can make the landings nice and smooth.”

Edinburgh native McKenzie is in the runner-up spot, 20 points adrift of Mount Maunganui’s Cody Cooper (Moto City Suzuki RM-Z450), but he won the final race of the day at Patetonga and is hoping that momentum will continue at Harrisville on Sunday.