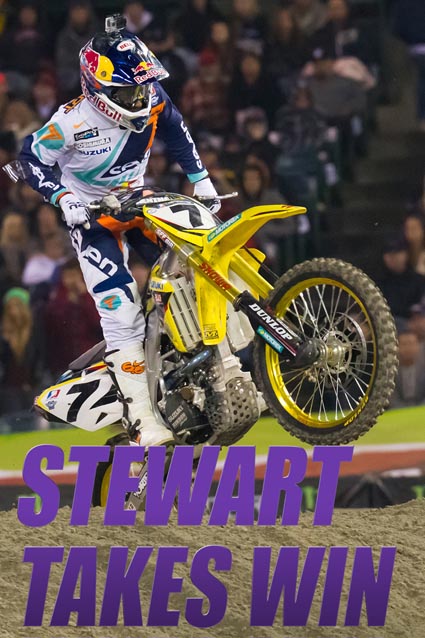 More than 68,000 fans crammed inside Atlanta Stadium to watch as Suzuki’s James Stewart won his first 450SX Class race of the season on Saturday night, the eighth round of the AMA Supercross Championships in the United States.

Honda’s Wil Hahn led from start to finish as he won the night’s Eastern Regional 250SX class main event en route to the first victory of his career.

Opening the 450SX class main event with the holeshot, Stewart – for the first time this season – led all 20 laps on the way to the win. Kawasaki’s Ryan Villopoto started the race in second place and chased down Stewart for the duration of the race, but came up 1.468 seconds short and finished second. Suzuki’s Davi Millsaps, who started the race mid pack, moved into third place on lap two, and finished third.

Stewart has now gone nine seasons with a supercross win to his credit, tying Jeremy McGrath and Chad Reed in this exclusive category. Stewart was AMA supercross champion in 2007 and 2009.

Meanwhile, the result on Saturday night meant Villopoto moved into second place in the season standings, while Millsaps enjoys a 22-point lead in the championship.

“I mean, what can I say, we won tonight,” said Stewart. “It means a lot; this whole season has been going crazy and to get a victory and to get a start, it was almost a perfect day. I was fastest in practice, fastest in the heat race, I got the holeshot in the main event and led every lap. I’m not going to lie, I was a little nervous because I haven’t been out there in a while.”

Stewart is the fifth different winner eight races this season.

In the Eastern Regional 250SX class, Hahn led the field of riders across the holeshot line in turn one as Kawasaki’s Dean Wilson and Suzuki’s Blake Wharton tucked in behind him for second and third, respectively. Red Bull KTM’s Marvin Musquin, of France, made a pass for second place on Wharton on lap two.

Hahn opened the season with a third-place finish last weekend and with tonight’s win, he moved into second place overall. Wilson, who finished second tonight, still has the championship points lead. Wharton finished third and is third overall.

“I put in a lot of hard work, and it paid off here tonight,” said Hahn. “I stayed positive out there and rode a smart race. It’s an amazing feeling to get my first win here at the Georgia Dome in front of so many fans. This has been a long time coming.”