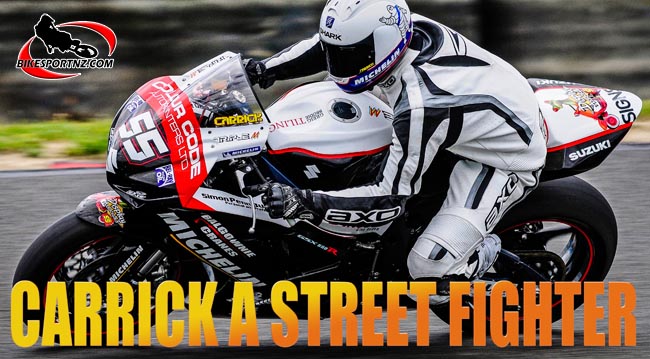 It was always going to be a big day for Wanganui’s Jayden Carrick, but the Boxing Day races on the streets of his own city could be something very special this year.

The 30-year-old bike and boat mechanic is in prime position to rise up and snatch the trophy in the Formula Two category after a brilliant performance at the second round of three in the series at Manfeild on Sunday.

Carrick (Suzuki GSX-R600) finished fourth and third in the F2 class at Manfeild, elevating him to third in the series with just the Cemetery Circuit races around the streets of Wanganui on Boxing Day to wrap it up.

“I’m a little surprised at how well I’m going,” said Carrick. “I had not raced a 600 until this season. I finished third overall in the Suzuki Tri Series last season riding a Suzuki RM-Z450 dirt bike in the super motard class.

“My new bike is the bike that Christchurch’s Dennis Charlett rode to win the 2012 national 600 supersport title … so there are no excuses really. I bought it off him and just peeled the No.1 off it and plastered my own number 55 onto it. My favourite number is actually five but I have not earned that national ranking and didn’t want to put it on my bike and be a bit of a Dick.”

“I started the day at Manfeild fourth overall in the F2 class, so I’m pleased to have moved up.

“There is always a danger factor to consider when racing on public streets. It’s always in the back of your mind and you’d be kidding yourself if you think you’re not scared.

“I’ll be thrilled to finish third overall in this series and anything better than that would be a bonus.”

The glamour Formula One class is likely to go down to the wire with any one of perhaps three or four riders capable of clinching the title at Wanganui.

RESULTS from Manfeild on Sunday: