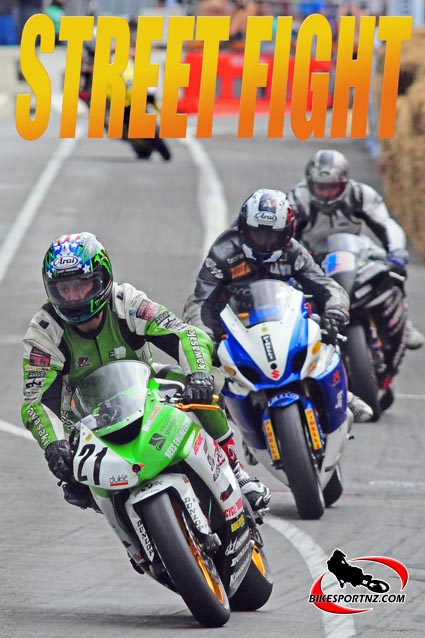 Can they keep up this incredible pace?

At Manfeild’s second round of the Suzuki Tri Series at the weekend it was top qualifier Ray Clee and race winners Nick Cole and Andrew Stroud leading the way – but the question now is ‘can they keep up this kind of pace on the tight and twisty public streets of Wanganui?’

Popular Australian Robbie Bugden took his Triple R Suzuki GSX-R1000 to back-to-back wins in the glamour formula one superbikes class at the opening round of the Suzuki Tri Series at Hampton Downs, near Huntly, nearly a fortnight ago.

The man he beat to the top step of the podium that day was defending Tri Series and national superbike champion Stroud (David Reid Homes Mobil 1 Suzuki GSX-R1000), the Hamilton man always in the hunt but forced to accept the No.2 spot that day.

The 43-year-old Stroud finished 3-2 in his two outings at Hampton Downs and, with another solid display at round two at Manfeild at the weekend, this time finishing 3-1, he remains on target to win the Tri Series for an amazing fourth consecutive time when it wraps up on Wanganui’s Cemetery Circuit on Boxing Day.

The Hampton Downs event had been merely a hit-and-run raid for Bugden, the 31-year-old Brisbane man unavailable to race at Manfeild at the weekend, and he will also skip the Boxing Day classic on the infamous Cemetery Circuit, leaving Stroud the clear favourite.

But, while the Tri Series was not a priority for Bugden, he will be back in New Zealand for the nationals (which kick off at Ruapuna, in Christchurch, on January 8), and Stroud expects to be a tougher opponent by then.

Meanwhile, the men expected to keep Stroud honest in his attempt to retain the Tri Series crown and in his bid to keep his national superbike championship title, have also been impressive in recent weeks.