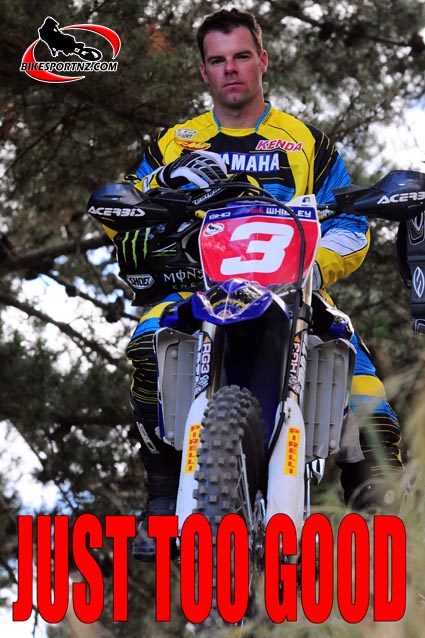 Pahiatua’s Paul Whibley gave his new bike just the indoctrination it deserved when he ran away to victory at round three of New Zealand’s Grand National Cross-country Series at Maddix Park in Tauranga at the weekend.

The Yamaha ace, fresh from another successful season of racing in the United States – when he again won the OMA series in America and finished runner-up in the US GNCC series – was simply too good for the cream of Kiwi talent at the weekend.

He took his Sargent Yamaha YZ450F to the front early in the race and never looked back, winding up as one of only four riders to complete eight laps in the two-and-a-half-hour race.

“I had just received my new YZ450 with enough time to set it up, have a quick ride then head north to the latest round of the NZ GNCC series,” said Whibley.

“The forecast was good but rain overnight turned the track to a mix of super slick clay and soft dirt.

“I started on the second row about, 30 seconds behind the leaders but charged my way forward and had taken the lead just before a lap was completed. The bike was working good with the base set-up I had used in the United States, dealing to the New Zealand conditions as well.

“The track deteriorated fast in several sections and, by the second lap, bottlenecks and some deep ruts were providing plenty to keep riders’ minds on the job.

“I was able to continue to extend my lead but the conditions on track meant it could disappear at any time with a slip-up on the slick clay or by getting wedged in a rut.

“An early pit stop was needed with the thick heavy dirt causing me to use more fuel than normal. Thanks to Sean Clarke for manning the IMS dumpcan and helping (my wife) Katherine with the pit stop. It was good to be back on the bike again after taking a break from racing at the close of the US season.

“A little enduro-X section near the pits also kept the spectators and pit crew entertained with many riders coming undone on the slippery logs. The track was really enjoyable and challenging and was a credit to the track crew for keeping the tough sections in and giving a hand to those that needed it.

“At the close of the two-hour 30 minute event, I had a good lead and all had gone to plan.”

Auckland’s Chris Power (Honda CRF450) had been running in second place when his bike stopped in a deep rut, boiling all the coolant out of his radiator.