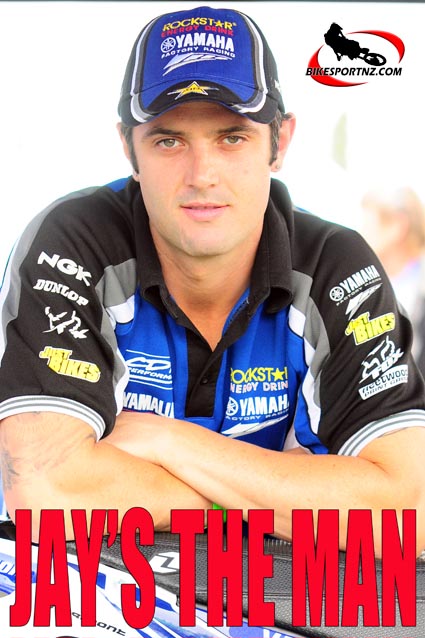 It was a particularly memorable night for him, coming only two days after his baby boy, Jax, was born.

Team Axis 07 Motorsports rider Cody Mackie took the first holeshot of the Open Triple Challenge final, but crashed while in the lead. Monster Energy Kawasaki’s Billy Mackenzie and Raceline Pirelli Suzuki’s Lawson Bopping were neck and neck for first, but Mackenzie went down as soon as he got the lead allowing Bopping to take the win with Jay Marmont right on his tale in second and his team-mate Jake Moss third.

Mackenzie took the holeshot in the second final shooting out to an early lead. Hometown rider Team Motul Pirelli Suzuki’s Dan McCoy was second and Marmont third until Marmont passed McCoy a few laps in and went after Mackenzie. He eventually made the pass and checked out to take the win. Mackenzie slipped on the final corner giving McCoy second and Moss third.

Marmont took the holeshot in the third final and never looked back for the win and his first overall of the championship. Bopping was second and second overall with Mackie third in the last final and JDR Motorex KTM’s Tye Simmonds third overall. Unfortunately Moss had a bad crash on the last lap and was taken to hospital.

“It was so good to go out there today and race with all of the emotions I had coming into the round. It feels great to finally get a win and I’m feeling really positive about the rest of the championship. A huge thanks to the CDR Yamaha team for all their hard work. It was tough seeing Jake go down on the final lap though and I hope he is alright and back out there racing next weekend,” said Marmont.

There was a huge pile up on the first corner of the second Lites final taking out most of the field. JDR Motorex KTM’s Harrison led the whole race to take the win with Moss showing his incredible speed to ride his way into second after a bad start and Styke finished third.

Monster Energy Kawasaki’s Dean Ferris took the early lead in the third and never looked back. Faith came second and Harrison third. Moss had bike problems on the first corner putting him dead last and way behind. Once again he showed his speed and climbed back to finish 10th.

Harrison took the overall with Faith second and Styke third.

“I am just so ecstatic to be up here and get the win. It has been a long time coming and it’s so good that all of my hard work and the team’s have finally paid off. I just want to keep my head down and go racing and I am confident I can be at the pointy end of the championship standings,” said Harrison.

There were a few big crashes in the Under 19s and Michelin Development Series finals. Joel Dinsdale took out the juniors while Errol Willis dominated from start to finish winning in the Under 19s.

Round four of the Australasian Supercross Championship will take place at Maitland Oval next Saturday, November 12.

Super X Open Standings after Round 3 of 5