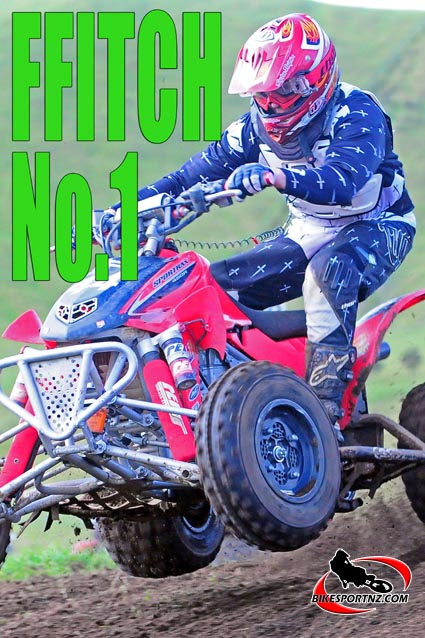 Amberley’s Ian Ffitch is the national ATV champion for 2011.

The Honda rider looked virtually unbeatable at the two-day New Zealand ATV Championships at Fell’s Farm, near Kaukapakapa, at the weekend but his six wins and one runner-up finish from his seven premier grade races was perhaps slightly less convincing than it sounds.

“Five or six guys had the chance to win in every race. It wasn’t so easy,” said the modest Ffitch afterwards.

“It was very close racing and I really did have to earn it.”

Rotorua’s Jason Jepson (Yamaha) was the man who ended Ffitch’s win streak, taking victory in the rain-marred final race of the weekend.

“We were a bit lucky with a few showers on the Friday night helping to keep the dust down through the weekend. Dust only started to be a problem late on Sunday and then it rained again before the last race. It was perfect timing really.

“The racing was extremely tight throughout the grades and made for good spectator viewing.”

“The production 250 class is a new class this year, designed to keep down the costs of racing, but it also turned out to be one of the most exciting with racing very tight indeed,” said Taylor.