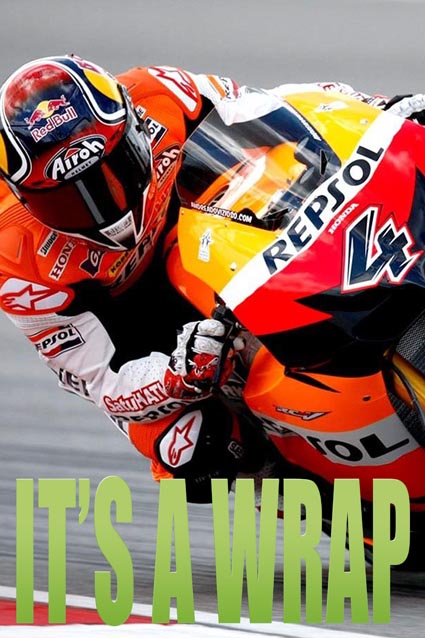 The world champion, who clinched the title on Oct. 16, finished in 48 minutes, 18.645 seconds. Spies was only 0.015 seconds behind in light rain on the 4-kilometre (2.5-mile) Comunitat Valenciana Circuit.

Andrea Dovizioso(pictured above), of Italy, was third.

Stoner raced away after his 12th pole of the season and led by 10 seconds from Honda team-mate Dani Pedrosa, who ended the race fifth.

Riders did a lap of honour and gathered on the track to pay tribute to Italian rider Marco Simoncelli, who died in an accident at the Malaysia GP two weeks ago.

With three laps to go, Spies overtook Stoner when the Australian rider ran wide at a corner.

”Because I was in the lead I was also the first one to hit the rain and I wasn’t sure how much to push,” Stoner said. ”Ben got past me and looked confident in the conditions so I said to myself, ‘OK, I’ll push and risk it,’ and I’m very happy.”

Stoner came top of the standings with 350 points, a commanding lead over second place Jorge Lorenzo of Spain with 260 who was not fit to race due to a finger injury. Dovizioso was third with 228.

Loris Capirossi said goodbye to MotoGP and embraced a visibly moved Stoner in front of the Honda 125cc on which the Italian had won his first world title 21 years ago.

Pirro dedicated his win to Simoncelli, saying the Italian had been his inspiration.

Stefan Bradl of Germany finished top of the Moto2 standings with 274 points as Spain’s Marc Marquez ended second with 251 and Andrea Iannone of Italy third with 177.

Nicolas Terol of Spain won the 125cc category world championship at his hometown circuit as he rode his Aprilia into second place behind race winner Maverick Vinales.

Hector Faubel came in third in a race that was preceded by tributes to Simoncelli.

”Right now I don’t even believe it, it has been a very difficult year for me,” said Terol, who finished with 302 points overall.

Johann Zarco of France was second with 262 and Vinales third with 248.