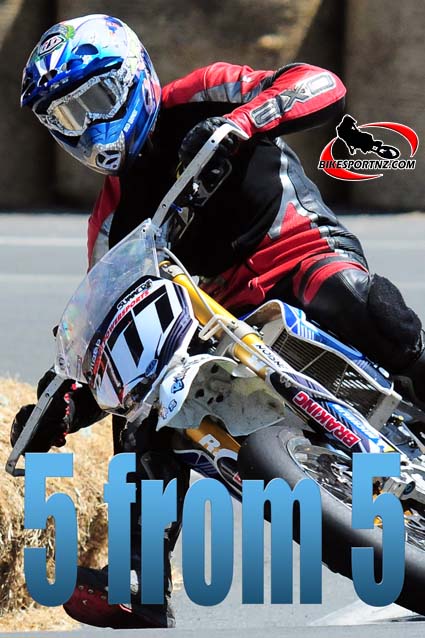 “Let’s mount a hit and run raid” across Cook Strait … that’s what Auckland plumber Toby Summers said to his mates in a moment of wild exuberance.

But that’s exactly what he and Wanganui’s Glen Hayden and Taumarunui’s Ian Atkins did over the Labour Weekend.

Summers packed up his 2011-model R&R Powersports Yamaha YZ450F to tackle the annual Greymouth Street Races and he ended his day’s racing in the South Island on Sunday by scoring five wins from five starts in the hybrid super motard class.

Super motard racing is the best of both worlds in motorcycling with the class featuring lightly-modified dirt bikes competing in a dirt/tarseal environment.

Although it was a dominant performance from the inter-island hoppers, Atkins couldn’t quite make it a North Island trifecta for the event, taking his Bike Torque Yamaha YZ450F to fourth place each time.

“I was doing quite well at this event last year too, until I got run over and suffered concussion. It was nice to come back and finish the job,” said the 38-year-old Summers.

“It’s a great event to go to … everything is so social and relaxed.”