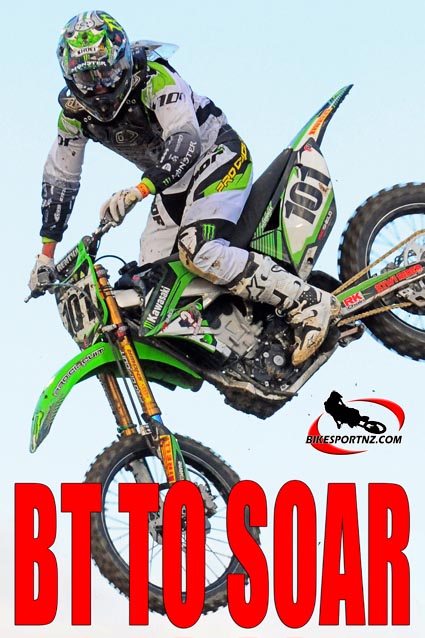 Determination and dedication has its rewards for Kiwi motocross hero Ben Townley.

After several months sidelined with injury, the Kawasaki man from Taupo will mark his international comeback at the inaugural Monster Energy Cup at Las Vegas’ Sam Boyd Stadium on October 15.

The former world motocross champion has not been idle during his enforced “down time” from the top level, racing numerous events back home in New Zealand as he steadily worked to rebuild his strength and confidence.

That attitude and commitment to recover has done him proud and, with assistance from an old friend in New Zealand, Kawasaki Motorcycle Distributors boss Mike Wilkins, Townley was able to continue riding the Kawasaki KX450F throughout his time at home. He even had a 2012 model bike at his disposal for the past few weeks.

So, when the high-profile Monster Energy Pro-Circuit Kawasaki team, headed by the legendary Mitch Payton, came calling with an offer for Townley to race in Las Vegas, the Kiwi star was ready to accept the fresh challenge.

“I was in the United States to watch at the final round of the nationals there and I had a bit of a chat with Mitch Payton. He’s a man who has been involved a lot with my career and when he learned that (South African rider) Tyla Rattray was not available to ride the MX1 class for him in Las Vegas, he asked me to do the job.

“I have already been riding the new 2012-model Kawasaki KX450F and even had time on one in the US before coming back to New Zealand.

“It’s a good bike made great and I really think I can win on this bike. It is a lot slimmer and sleeker than the previous model and that means it is very nimble and can turn very quickly.”

This track at Las Vegas will be a blend of supercross and motocross features.

“The race concept is intriguing,” said Townley. It’s a combination of motocross and supercross and there is also a lot of money on the line.

“But, to be honest, the money is secondary. My focus is on getting myself back onto the world stage.

“I have been working on all areas of my riding and I’m ready to go racing internationally again,” he declared.