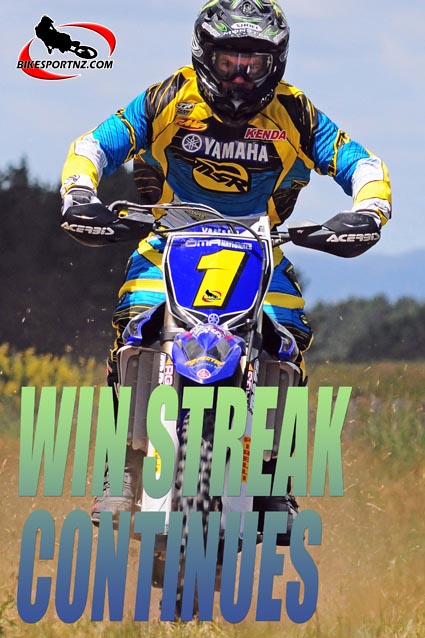 All the top riders showed up for latest big motorcycle cross-country race in the United States, but No.1 was Kiwi rider Paul Whibley.

Pahiatua’s Whibley led fellow Yamaha ace Jordan Ashburn to the chequered flag at Spring Creek, Millville, Minnesota, at the weekend, the sixth round of 10 in the Off-Road Motorcycle and ATV (OMA) series.

The racers battled in temperatures in the high 30s (Celsius) and, with humidity to match, the going was tough.

But it was really just another day in the office for Whibley – the former Manawatu forestry worked known affectionately in race circles as “The Axeman” – and the Kiwi hero is now well on target to claim a record-tying fourth straight championship.

He led from the start, claiming the $200 holeshot award, with rival Chris Bach (Beta) close behind.

Tennessee’s Ashburn eventually powered past Bach and he held the No.2 spot until the finish.

American international Jimmy Jarrett (Honda) marked his return to the series after breaking his collarbone at round four and he showed good speed, running a close third for a lap or so, before slipping back to settle for fourth overall, a minute ahead of team-mate Scott Watkins.

The win at Millville meant Whibley, the defending champion in the series, further boosted his position at the top of the 2011 standings and he looks well place to take his Yamaha YZ450F to another title victory when it all wraps up in Illinois on October 30.

Whibley has won five out of the six races in the series thus far and now enjoys a 41-point lead over Ashburn at the top of the championship standings.

Whibley has a jam-packed race calendar to deal with again this season.

He is also running near the top of the main motorcycle cross-country race action in the US, the GNCC series, a series that is taking a mid-summer break at the moment.

The GNCC series does not resume until September 11, at Unadilla, near New York, but Whibley will keep himself sharp as he continues to race at lesser events around the country.

He is currently third overall in the GNCC series.