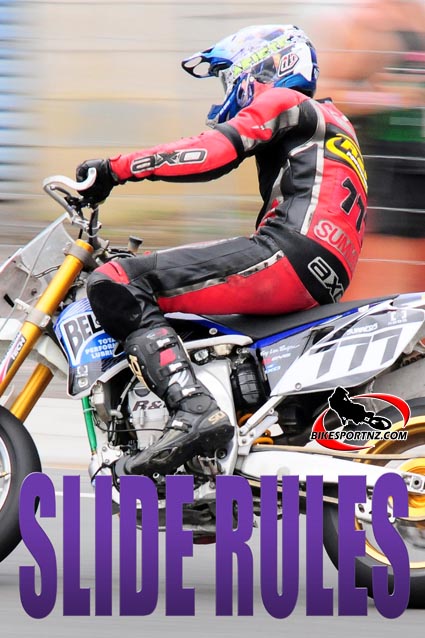 The 38-year-old Manukau plumber is in perhaps the hottest form of his racing career and the season hasn’t even started to warm up yet.

The dominant individual at the annual Dirt Guide Motard Endurance Races at Taupo on Saturday, Summers took his 2011-model Yamaha YZ450F to record two major victories, running away with both the one-hour ironman solo race and the two-man two-hour marathon for the hybrid dirt bikes.

Motards are essentially motocross bikes kitted out with road-race sprockets and tyres and the race course comprises elements of both the off-road and tarseal codes and Summers has rung a few alarm bells for his rivals this coming season.

Summers teamed with fellow Aucklander Steven Croad to pull off the two-hour teams’ win at Taupo, the pair completing 44 laps in the time.

Summers beat Taupo’s Scott Moir to the chequered flag in the 22-lap one-hour solo ‘sprint’ race – setting the fastest time for the race of two minutes and 37 seconds – and the Summers/Croad combination beat Wanganui pair Glen Haden and Richard Dibben to the line in the two-hour event.

“I guess you could say it all went to plan,” said a modest Summers afterwards.

“This was my first big outing for the new season and it was good to come away with a win. I took the Yamaha down to the Taupo track a couple of weeks ago and all the suspension settings we worked out during that session seemed to be good for the racing.

“But, to be honest, these bikes are good to go straight out of the crate. The only real change I made was to install a larger fuel tank on the bike – thanks to Yamaha’s national enduro champion Rory Mead – and that meant I could avoid making an extra fuel stop.”

“I knew (former national motocross and supercross champion) Daryl Hurley (of Hawera) would be the quickest rider on the dirt section but I don’t think he’s got enough experience yet on the tarseal.

“It’s great to have the bike running so well so early in the season and I’m feeling very confident ahead of the upcoming road-race season.”

Summers, Rowe and all the other super motard riders prepare themselves now to tackle the popular annual Tri-Series, which kicks off at Hampton Downs in December, before heading to Manfeild and week later, before wrapping up on the streets of Wanganui on Boxing Day.