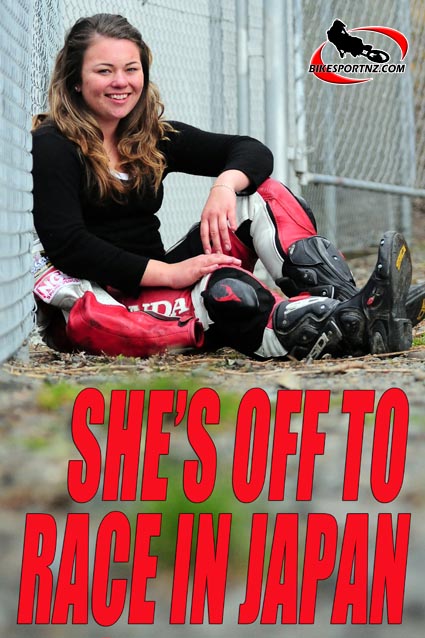 Auckland’s Avalon Biddle is one of New Zealand’s fastest motorcycle road-racers and now she’s keen to test herself against some of the best young men and women from other parts of the world, racing at the FIM Asia Cup of Road-racing at Sugo, in Japan, this coming weekend (August 27-28).

“It has all been a last-minute thing really,” said Biddle. “It’s only come together in the past couple of weeks. I’m very excited about it.

“All the bikes are supplied by the race organisers … they are all 150cc four-stroke Yamaha YZF R15 model bikes, each one identical to the next and the riders get their bikes allocated to them through a ballot system.”

That should make the racing very close indeed, something that Biddle is well prepared for after being involved in handlebar-to-handlebar racing at home during her New Zealand summers. She is a rising star in the sport in New Zealand and regularly beats the men.

The Asian Cup organisers were keen to have a New Zealand rider to line up against top talent from Thailand, Indonesia, Japan, Singapore, Malaysia and the Philippines, and so the offer was made.

“It is the off-season for me at the moment, so this will be a great learning experience for me,” said Biddle, a first-year Massey University student in Auckland. She is doing a double degree in sports business management and sports science.

Biddle is no stranger to top international competition, having travelled to Italy in 2009 to race in the Red Bull Rookies selection series. She has also raced in Australia in 2007, on a similar 150cc four-stroke bike.

“The four-stroke bikes are not as fast as the two-stroke 125s, so I imagine the racing at the Asia Cup will be very similar to what I experienced in Australia in 2007.

She leaves this week with her father, Keith, for support.

“It will be a fantastic. I’m really looking forward to it,” she said.