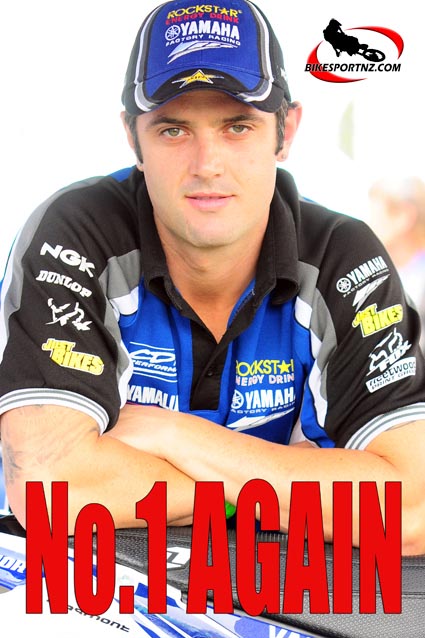 Despite an Australian Motocross Championships campaign fraught with difficulties from the beginning – he was only seventh overall after the first round of nine in the series – the man from Motueka had clawed his way back to the top of the standings by the time the riders were lining up at Coolum for the final round on Sunday.

Coppins (CDR Rockstar Yamaha YZ450F) started the weekend with a solid 18-points advantage over his team-mate, defending champion Jay Marmont, and looked like he’d push on to win the championship after the two men had shared the 1-2 spots in the opening two of four races on Sunday.

But then it all came unglued for the Kiwi hero when he was involved in a turn-one crash in the series’ penultimate race, the third of the day at Coolum.

When rival Dean Ferris (Monster Energy Kawasaki) crashed in front of him, Coppins had nowhere to go and he too went down, dislocating his shoulder in the process. Coppins was out for the race and did not line up for the fourth and final moto either, handing the championship to Marmont, who won both the final motos.

Marmont’s win meant he managed to do what no other rider in the history of the sport had done, by winning a fourth consecutive senior motocross championship.

Coppins had accumulated enough points before his season-ending crash to hold on to second spot in the championship, making it a CDR Rockstar Yamaha 1-2 for the class.

“I have torn the Librium which means surgery and a few months out,” said Coppins.

“I did have plans to head overseas and race after this weekend but they have been put on hold now, I will come back for another go next year I guess. It’s a bit frustrating but that is motocross as we all know the highs are high and the lows are low and, yeah, that is just the way it goes.”

It was a similarly tragic story for Coppins in the 2007 Motocross World Championships season when a small stone lodged in his rear brakes and caused his to crash and break his shoulder. He has enjoyed a massive 107-points advantage at the top of the standings, with just five of the 15 rounds to go, but, sidelined from that stage on, had to watch helplessly as Belgium’s Steve Ramon instead won the MX1 world crown.

Coppins again demonstrated his trademark toughness and determination to fight his way back from a seemingly impossible position in Australia this year but he will have to carry the No.2 panel on his bike in Australia next year.

It was a sad end for Ferris too because he had led the championship for most of the season.

Rotorua’s Michael Phillips (Honda) had another solid day at Coolum, finishing the event eighth overall, and he settled for sixth overall in the championship.

Mount Maunganui’s Cody Cooper (Suzuki), the New Zealand MX1 champion, won six out of 36 races in the open class this season but it wasn’t enough to position himself any better than eight overall in the championship.

A huge crash at round two put him out of action for that event and the next round too, effectively wrecking his Australian campaign.

In the Pro Lites (250cc) class, it was a case of ‘catch me if you can’ for KTM’s Matt Moss. With a massive points lead established earlier in the series, he could afford to ride conservatively over the final two rounds.

Yamaha’s Kirk Gibbs came on strong over those final two rounds but he still came up 10 points short of overtaking Moss.