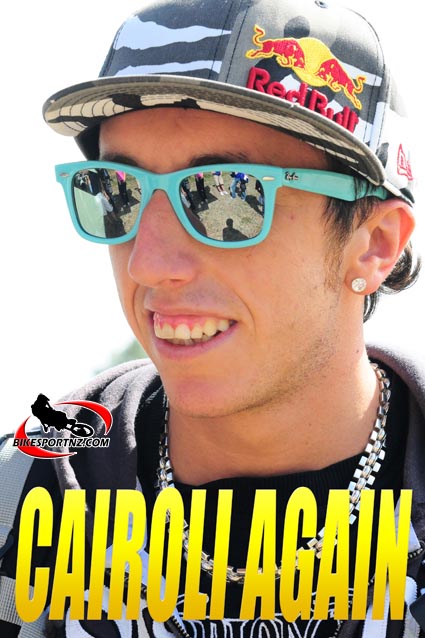 A red flag and a restarted MX1 race two were key in an overall victory for current championship leader Antonio Cairoli as uncharacteristic poor starts in both motos saw him struggling mid pack before eventually nailing his pace to take the win in a delayed second moto.

Indeed, the overall victory nearly went to World Championship returnee Christophe Pourcel on the Monster Energy CLS Kawasaki after he shot ahead of Stephen Frossard and defending champion Cairoli in race one to take a typically relaxed win, but it was race two that set the tone for the overall results.

That was lead early on by Scotsman Shaun Simpson on the LS Honda before Frossard took over, but for a while anyway those two set the pace with new Monster Energy Yamaha rider Carlos Campano in a season best third place ahead of Davide Guaneri after Pourcel had crashed out on lap one. But a huge crash for British rider Billy Mackenzie and TM rider Tanel Leok would bring out the red flag just under half distance to set the riders up for a full distance restart.

When the gate dropped once more it was Cairoli who made amends and took the holeshot, and once Frossard passed Pourcel for second the day was all but done for the top three. Cairoli still has to score points in the next round in Gaildorf in two weeks but he now has a very firm grip on the title once more.

Meanwhile, in the MX2 class, Germany’s Ken Roczen took another overall double in the sunshine in England to edge ever closer to the MX2 world title as his nearest challenger and KTM team-mate Jeffrey Herlings could only manage third.

It was home rider Tommy Searle on the Monster Energy CLS Pro circuit Kawasaki who was the closest overall to the speed of Roczen and a fighting third in race one, ahead of Frenchman Gautier Paulin, gave the home crowd something to cheer about and hope for a closer fight with Roczen in race two.

But their hopes were dashed as the young German took his second holeshot of the day and simply rode away from the rest of the field. Searle gave chase behind a revitalised Herlings, but neither had the pace of the number 94 rider. Belgian Joel Roelants was looking good for his first podium of the season after a second place in the first moto but bike problems struck in race two and his retirement gifted the last place on the podium to Herlings.