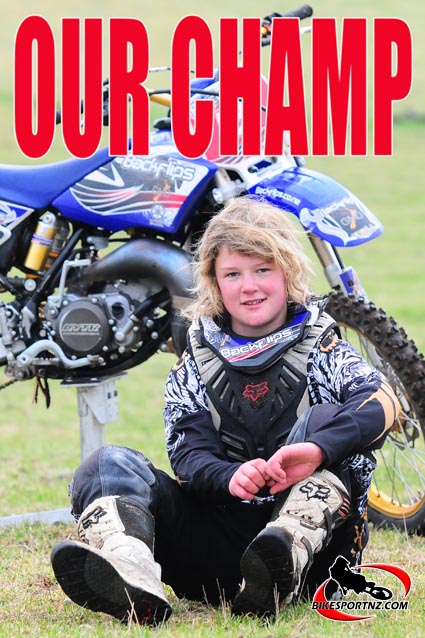 New Zealand’s Courtney Duncan is the talk of the American motocross scene.

And this despite her wrapping up her United States campaign early, opting not to venture out for her final race of the week-long competition at the Ponca City Junior Motocross Nationals in Oklahoma this week.

But the 15-year-old girl from Palmerston in Otago had already done enough to write her name into the record books, turn quite a few heads and encourage several factory teams to step forward with attractive offers.

Duncan’s most comprehensive result was when she took her Backflips Yamaha YZ85 to back-to-back wins and easily wrap up the national title in the 65-85cc girls’ class.

On both occasions, Duncan finished ahead of fellow Yamaha rider Kaitlyn Morrow, of Houston in Texas.

The huge annual competition, one of the biggest on the US calendar with more than 2200 riders participating, saw Duncan enhance her already glittering CV with a string of results that have made her “the most talked-about kid in the USA right now”, according to her proud step-dad, Noddy Turner.

“The dust here is terrible … even worse than it was at the Woodville motocross (in New Zealand in January),” said Turner.

“Courtney has been amazing all week.

“The temperature and humidity here has been incredible. It has been around the 110 degrees Fahrenheit (43 degrees Celsius) mark the whole time. You are sweating just sitting still.

In addition to her girls’ class win, the tousle-haired blonde also tackled the top boys in America, young men who will no doubt go on to become some of the sport’s high-profile and highly-paid superstars.

“She could have been on the podium there too but she crashed while running in third in the second race and had to settle for fifth in that race,” said Turner.

“But I don’t care where she finishes really, so long as she doesn’t get hurt.”

Turner was her mechanic and support crew and also there to give Duncan the occasional reality check.

“I don’t really think she could have done any better than this. I certainly never expected her to be running top-three against the boys here,” he said.

“These are all factory riders and teams she is up against, some of them operating tricked-out $40,000 bikes. It’s pretty unreal. We were just doing everything from under a small tent.”

Duncan was due to race one more time in the 85-150cc Open class, hoping to back up her runner-up finish from the first race in the class on Friday with another solid result on Sunday, but she instead decided that discretion was the better part of valour and opted not to race.

“I hurt myself a bit in one of my races yesterday and decided not to risk hurting myself further,” said the year 11 pupil from East Otago High School in Palmerston.

That meant she slipped back to finish the event 23rd overall in the Open class, but, as she pointed out, “I was happy that I had done all I needed to do here”.

When Duncan wrapped up her first New Zealand Junior Motocross Championships title in Tokoroa in April, it was one of the sweetest moments of her glittering career.