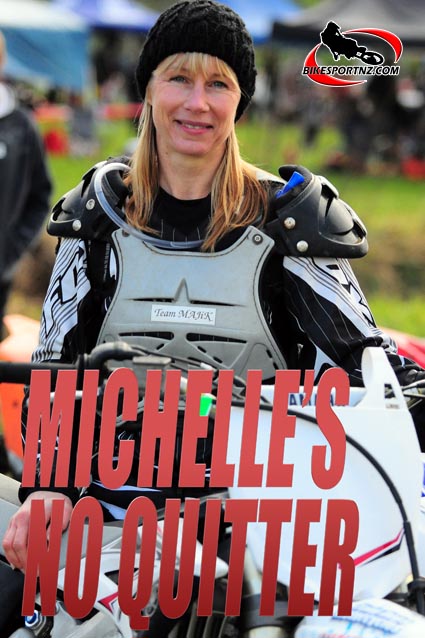 Whakatane mother-of-two Michelle Waghorn has the ability to delight and frustrate in equal proportions.

The 44-year-old amazes with her ability to compete in cross-country motorcycling at the highest level – a sport typically the domain of testosterone-fuelled young men with biceps the size of grapefruits – but, equally, she can be very annoying, especially to anyone trying to keep up with her on the race track.

Waghorn took her Tony Rees Yamaha YZ250F to finish 116th overall in the 175-rider field at the 34th annual Tarawera 100 dirt bike marathon at Te Teko, in the Bay of Plenty, on Saturday, beating many male riders half her age and with larger capacity bikes.

This was also good enough for her to finish fourth overall in the battle-within-a-battle for honours in the women’s category, one of the few times in the past few years that she has not been on the podium.

The women’s title was won by Aucklander Julie Greenslade.

But one achievement in which Waghorn can’t be matched it the number of times she has contested the iconic Tarawera 100 marathon – she’s now made 12 consecutive appearances.

“I had done a little less riding in my build-up to this year’s event,” she explained, just a little disappointed not to finish in the top three of the women’s class.

“But I was determined to keep my record of appearances going.

“There are not many women who choose this as their sport but I really enjoy it. I relax when I’m on a bike and see it as a great way to relieve life’s stresses.

“This is one event I am determined to do every year. It’s a great event, although, when I took a look at the start area before the race, I knew it was going to be a tough one this year. It was pretty gnarly.

“I managed to get through the carnage, though, but then crashed on the opening lap and had a sore shoulder after that. I had no strength in my arms after that.

“I like to think that, by riding, I might inspire other females to give it a go.”

Meanwhile, Waghorn’s son, 15-year-old Jordan Waghorn, made his senior debut at the Tarawera 100 on Saturday.

He rode his Yamaha YZ125 to 59th overall, good enough to finish seventh in the under-19 years’ class and this was despite suffering a flat tyre midway through his third lap of four in the gruelling 160-kilometre journey.

“The bike was hard to control with a flat tyre,” explained Jordan, a year 11 student at Trident High School. “I think it was a really good thing just to survive until the finish.”

There is probably no doubt the Waghorns will be out in force again for the 35th running of the Tarawera 100 next year.