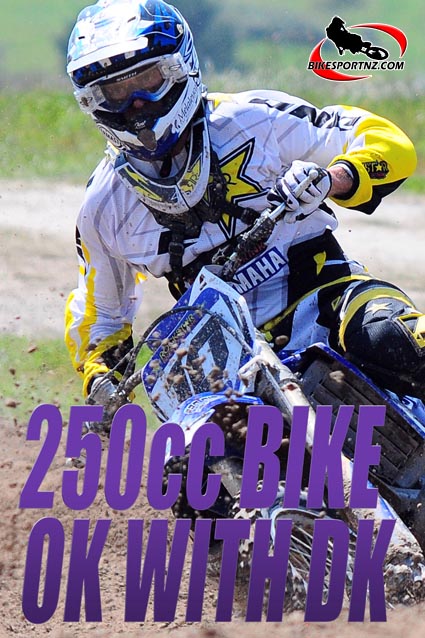 Fortunately for national MX2 class motocross champion Darryll King, he possesses as all those factors in abundance.

The only component that the 42-year-old from Hamilton might lack is horsepower – he’s heading to the Kawerau venue this weekend with his trusted Rockstar Yamaha YZ250 to do battle with the nation’s elite cross-country racers, many of whom will be on 450cc bikes.

But King reckons he’s still in with a chance of repeating an outright win at the event, in much the same way he did when racing a similar YZ250 to victory at the Tarawera 100 event in 2002.

The 100-mile (160-kilometre) race distance from which the event draws its name is typically a battle of doggedness and determination as much as it is a battle of pace and King knows his bike is as durable as they come.

“I’m really looking forward to the race. It’s part of my build-up to a couple of international motocross events I am intending to race in the coming months.

“I always try to ride the Tarawera 100 event. It’s a great race, a good, high-profile event. My body is ready, willing and able to give it a crack. I’ve got a slightly bigger fuel tank on the YZ250 and we’ll just see how we go from there.

“To be honest, I doubt if I can win it, especially not if (last year’s Tarawera 100 winner and MotoGB Suzuki’s reigning national MX1 motocross champion) Cody Cooper shows up, but I always ride well at this event and, if I ride smart, who knows what might happen.”

Meanwhile, King’s younger brother Damien King has taken a Yamaha YZ450F to win the race outright three times in the past five years but, sadly, he will be a non-starter this weekend as injury keeps him sidelined.