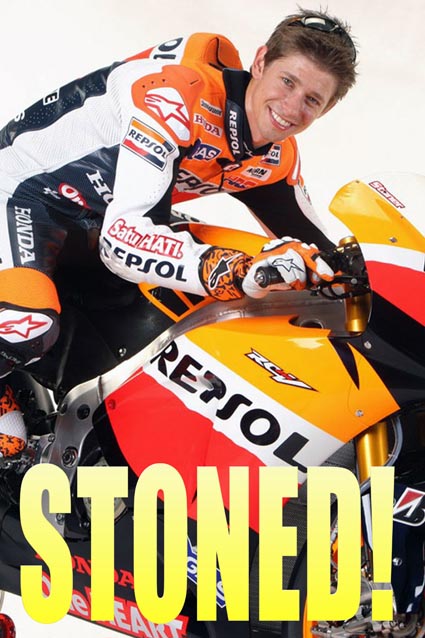 Australia’s Casey Stoner pulled away from championship leader Jorge Lorenzo to win the weekend’s Catalunya Grand Prix, notching up his third win of the season.

The Honda rider hit the front at the end of the first lap and steadily extended his lead, the only apparent threat to his position coming from the gathering rain clouds which came close to forcing the riders to change to their wet-weather bikes.

Spaniard Lorenzo came in second ahead of Yamaha team-mate Ben Spies, of the United States.

Italian Marco Simoncelli, who had started on pole, was sixth behind compatriots Andrea Dovizioso (fourth) and Valentino Rossi (fifth).

World champion Lorenzo tops the riders’ standings with 98 points from five races, seven ahead of Stoner who also won in Qatar and France.

Dovizioso climbed up to third with 63 points, two ahead of Dani Pedrosa who missed the race with a broken collarbone.

“Jorge got a very good start and I had to wait until the end of the first lap to attack him,” 2007 world champion Stoner told Spanish television.

“Once in front, I had to be patient and see if he could keep up with me.

“It made it difficult when it started to rain. On the last curve it was getting a bit slippery but we managed to bring it home. It’s an important victory.”

Simoncelli’s poor start left Stoner and Lorenzo battling it out between them but the Honda was clearly quicker, as it had been during practice over the last two days.

When rain drops began to fall near the end teams rushed to ready the wet-weather bikes, but the feared downpour never arrived.

“We knew Stoner was going to push hard. I tried to keep up with him but when it started to rain it would have been easy to make a mistake,” Lorenzo said.

“It was a delicate situation and we had to be intelligent especially on the last few laps. We still lead the championship and we’ll have to see in the coming races if we can get closer to Casey.”

In Moto2, championship leader Stefan Bradl, of Germany, pulled 43 points clear at the top of the standings, the Kalex rider coming in ahead of Spaniards Marc Marquez and Aleix Espargaro.

Spaniard Nicolas Terol won the 125cc race after judges ruled Frenchman Johann Zarco had illegally pushed him off the track on the final bend.

The championship leader, on an Aprilia, was followed across the line by another Spaniard, Maverick Vinales, and Germany’s Jonas Folger.