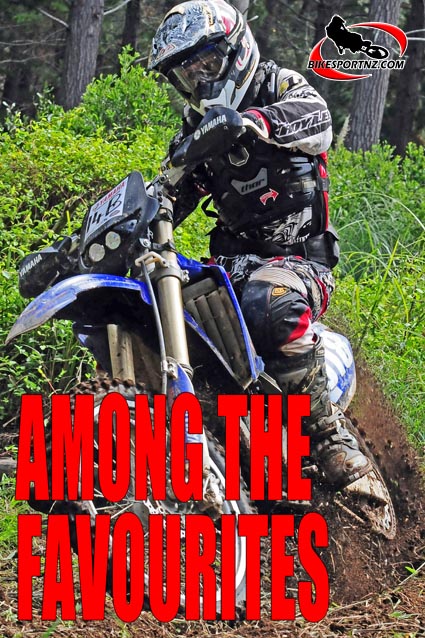 He may have one of the smallest bikes in the competition, but Titirangi’s Callan May could be the surprise package in the tight going this weekend.

After a two-month break, the Yamaha New Zealand Enduro Championships resume on Sunday at Riverhead Forest, west of Auckland city, and local rider May will take his two-stroke Yamaha YZ125 into battle against the 450cc and 250cc four-stroke bikes of his rivals brimming with confidence.

The racing will be tight in among the foliage and tree roots and that should suit the talented teenager at this fifth round of six in the series.

However, Taupo’s Rory Mead remains the favourite to win on Sunday.

Just back from a stint racing in the United States, Yamaha ace Mead hopes to pick up where he left off at round four of the series, near Whangarei in March.

Mead (Yamaha YZ450F) won the day at Whangarei and extended his overall lead at the top of the expert grade, his advantage now out to 11 points over nearest rival Karl Power (Honda CRF250), of Auckland.

Mead and Power might both be in for a shock, however, with 2010 national enduro champion Jason Davis, of Whangamata, and multi-time former champion Chris Birch, of Auckland, both back in the country this weekend.

Davis has been racing enduro events in the United Kingdom, while Birch has set up a new life for himself in South Africa. Both riders are very familiar with the traps and pitfalls of racing at Riverhead, so they could really throw a spanner in the works for this season’s title hopefuls.

But, with three outright wins in a row, Mead is edging ever closer to the national motorcycling title that he last held in 2009.

In addition to winning the Whangarei event and firming his grip on the outright title, Mead also moved to within just a few points of taking over the lead in the over-300cc four-stroke class, the advantage there currently held by Tauranga’s Reece Burgess (Husaberg FE450).

Perhaps the only reason Mead does not already lead the separate battle-within-a-battle for bike class glory is that he changed bikes during the season.

Mead rode a smaller Yamaha YZ250F to victory at round one of the series in January, before switching up to the bigger 450cc Yamaha and starting a win streak with that bike.

Other riders likely to feature this weekend include Mokau’s Adrian Smith (Yamaha YZ250F), currently third overall and in the No.2 spot in the under-300cc four-stroke class, behind Power, and recently-crowned 2011 national cross-country champion Adam Reeves (Yamaha YZ450F), of Palmerston North.

Tokoroa’s Sean Clarke (Yamaha WRF250) is top of the veterans’ class and, as a many time former national champion and former International Six Days Enduro medal winner, he can never be counted out.

The sixth and final round of the Yamaha-sponsored series is set for Taupo on July 2.