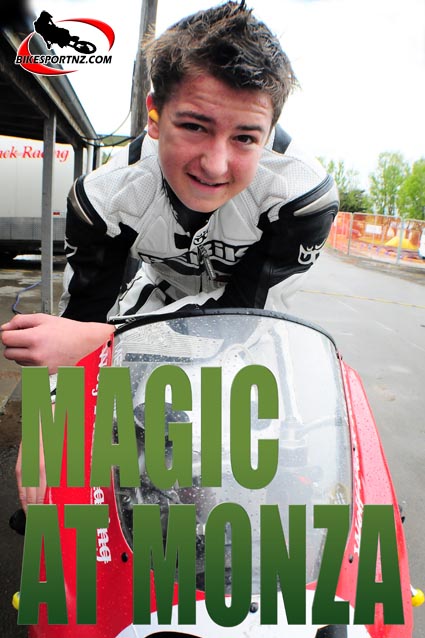 The Auckland teenager raced at the second round of the 2011 European Junior Cup in Monza, Italy, at the weekend, finishing the race sixth overall, this event sharing the programme with the fourth round of the World Superbike Championships.

European Junior Cup is for young riders aged between 14 and 17, all on identical Kawasaki Ninja 250R machines, taking part in six rounds of the World Superbike Championships calendar. 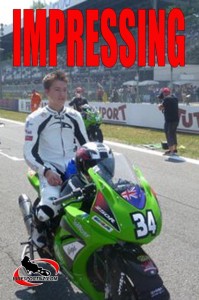 The riders each drew lots for their Kawasaki Ninja 250R race motorcycles, so no rider had any mechanical advantage over any other competitor.

Mettam qualified sixth on the Saturday in a tight qualifying session where 3rd to ninth was separated by just 0.4 of a second – most of the racers had stepped it up from the previous round at Assen (where there are more corners) to the fast circuit of Monza with long straights and a lap of 5.777 kilometres, it was going to prove to be a real battle on the same bikes.

The race was over seven laps and it took place just before WSB race two in front of a huge crowd in excess of 110,000 people.

The track is inside a public park (but with controlled access to the circuit) and has many grandstands.

Mettam got a good start with the Aussie Matt Davies and Assen round winner Tom Busch, from Germany, put a break on the next seven riders in lap two and so it would stay that way to the end of the race.

From position 3-9 over the five laps they probably put 70-80 passes on each other. For example the 17-year-old rider Daniel Teixeira, from South Africa, who actually races an R1 back in South African Stock 1000cc class, over the last 4 laps went from 3rd to 8th to 4th to 9th.

He is a race-hardened individual with a lot of experience but said that was the best race he’s ever had with that much passing going on.

For Kiwi hero Mettam, it was quite a new experience and he kept his head when he needed to as things like going five wide into The Paraboloca turn and in turn one are not what he has ever experienced before.

Some interesting points from the race were that Mettam topped the speed trap reading at 179.5km’s per hour (speed trap is taken near end of front straight – next best was 176.9), although there is a faster point out back of the track due to a downhill straight of some 800m and his best lap time was only 0.095 slower than Matt Davies’ best, who won the race by 0.046 of a sec from Tom Busch.

In terms of the championship, it was important to finish the race & bag some valuable points as there is a long way to go yet. Mettam is now running third in the Championship, just three points behind second-placed Davies and he now looks forward to round three at Aragon in Spain in a month.

This week, Mettam is getting a test ride at Mugello circuit (3 hours from here with an Italian 125GP team). It will probably be for one 30-minute session but is something he is looking forward to and getting to know his way around another European Circuit also.

Good couple of days for him from Monza at WSB in front of 110,000 to Mugello and, just to top it off, he is just as much looking forward to bucket racing at Mt Wellington on Saturday and Sunday when he comes back to New Zealand later this week.