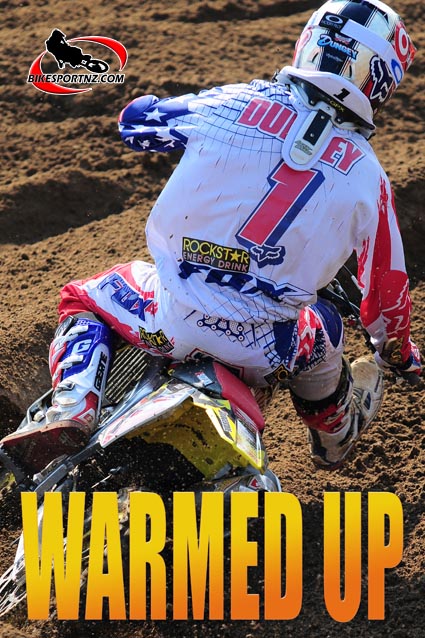 The riders are all refreshed, warmed up and ready to go as the United States Motocross Championships are set to kick off this weekend at Hangtown in California.

The Supercross season is a done deal and that gave riders plenty of opportunities already to test one another out and get sorted for the outdoor series.

Most of the AMA stars took the weekend off during the United States GP visit by the Europeans riders last weekend, so there should be no excuses of injury or burn-out when the gate drops on for the domestic series on Sunday.

Sadly we won’t see James Stewart or his Yamaha team-mate Kyle Regal in the starting line as they claim they are not 100% ready for the outdoors and will be skipping Hangtown at least.

“Everyone witnessed the way I struggled during the Supercross series this year and while I’d like to race this weekend, we just aren’t ready,” Stewart said.

“I hope fans will understand.  The decision has been very hard to make, but we won’t race till we’re ready.”

The Australian rider was knocking on the door for his first career win several times last season. He will look for similar success with the best opportunity of his career as a member of the team that has won the last two premier-class titles.

After missing out on the Lucas Oil AMA Pro Motocross Championship last season, Villopoto is looking to capitalise on some recent momentum. The three-time national champion secured his first career title on the big bike just a couple weeks ago with the AMA Supercross Championship, following a highly-competitive season.

After winning his first-career 450 Class start in 2009, Villopoto has battled injuries over the last two years and has not competed full time in American Motocross since winning his final 250 Class title in 2008. Villopoto’s third start since making the transition into the premier class will signify his first full-season against the fastest riders on the planet.

In addition to this trio of riders, several other challengers will line up at the starting gate this Saturday, signifying one of the deepest fields of competitors ever in American motocross.

Leading this charge is Red Bull KTM’s Andrew Short, who finished third in the championship last season. The perennial front-runner has long been one of the most consistent riders in motocross and he will look to give KTM its first win in the 450 Class. Last season, his team-mate Mike Alessi secured an impressive final moto victory at Hangtown for the Austrian brand. The combination of the two riders will give KTM the best opportunity at success in many years.

With the overall victory at Hangtown last year to his credit, TwoTwo Motorsports/Bel-Ray Racing’s Chad Reed should also be a fixture at the front of the field on Saturday and beyond.

The 2009 Lucas Oil AMA Pro Motocross Champion had an up and down season during his title defence, but with a clean bill of health and support from Factory Honda, Reed is eager to show his younger counterparts that he’s still ready to mix it up.

Speaking of veterans, after compiling an impressive season in a substitute role last summer that included one win, Kevin Windham is back for more in 2011 – reprising his role as a stand-in at American Honda. The passion for competition and the love of the fans was too much to keep Windham away during his 18th year of professional competition. He will make a special appearance at Hangtown, substituting for injured rookie and reigning 250 Class Champion, Trey Canard.

To challenge this exceptional field of talent, the Dirt Diggers North Motorcycle Club will present a trademark layout that combines high speeds with significant technicality, in addition to several elevation changes. The legendary circuit is renowned for its dynamic layout, which allows the thousands of fans in attendance to see nearly every aspect of the track. As the longest running event in American Motocross, the Hangtown Motocross Classic even precedes what is now known as the Lucas Oil AMA Pro Motocross Championship.

The rising stars of the 250 Class will also be in action, including GEICO Honda riders Justin Barcia and Eli Tomac, who made history at Hangtown last season by winning his first-career start. They will be flanked by a four-rider lineup for Monster Energy/Pro Circuit/Kawasaki with Tyla Rattray and Dean Wilson, each of whom won in 2010, in addition to Blake Baggett and Broc Tickle. Also making his American Motocross debut will be Red Bull KTM’s Marvin Musquin, a two-time World Champion. The French transplant is looking for big things on U.S. soil and with Canard’s vacancy of the title with his move into the 450 Class, Musquin and his rivals are sure to provide stellar competition.